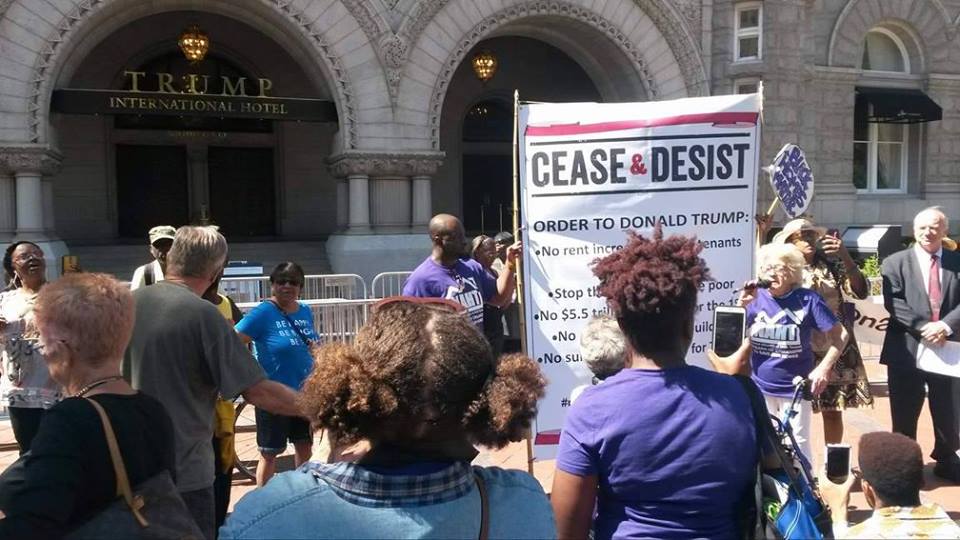 In its FY 2019 budget request, the Trump Administration has once again proposed radically deep cuts to the HUD budget, rent increases for millions of tenants, and bogus “work requirements” that will throw tens of thousands of people on the streets.

While Trump’s cuts for 2019 may be “dead in the water” on Capitol Hill this year, they set a dangerous marker where the Administration wants to go in the next decade. Worse, Trump’s bogus “work requirements” for Medicaid, housing assistance and Food Stamps will be pushed in legislation expected to be filed in March--and has broader support on Capitol Hill.

The elected, all-tenant NAHT Board calls on NAHT affiliates and allies to RESIST these proposals! Plan a response in your community! Some examples of what you can do:

• Line up tenant leaders for quotes in media stories about the cuts--issue a press release and call local media, to make tenant voices heard! Use the press release from the NAHT Board for quotes and messaging. Find information about how budget cuts affect your state in this state-by-state guide. Find out how much tenants’ rents will increase in your state here.

• Start a social media campaign. Post your messages to Facebook, Twitter and other social media. Coalition for Human Needs posted this useful guide for tweeting at your state's elected officials and sample tweets. Find your Senator’s Twitter handle here and your Representatives Twitter handle here. Organize Twitter users to tweet on the same day or in a specific time window using the same hashtag to get your topic “trending”. The National Low-Income Housing Coalition is recommending #handsoff as a hashtag to use across the movement.

• Tell tenant stories. NAHT is collecting and posting stories of tenants affected by cuts on its Facebook page and website. Please send quotes from tenants, the name of the building they live in, if they are a Section 8 voucher tenant and a picture to [email protected] See example here.

• Organize a press conference at a housing development, city agency or HUD office--invite elected officials to join tenants to protest the cuts! The Mass Alliance of HUD Tenants delivered a Cease and Desist Order to Donald Trump to the HUD in Boston to protest budget proposals and rent increases to tenants. See their flyer here.

• Reach out to allies. Seniors, people with disabilities, CAP agencies, Legal Services, Food Stamp recipients, neighborhood groups and CDC’s have a direct stake in fighting the cuts. So do health care groups, trade unions, teachers and students. Peace groups can be allies fighting increases in Pentagon pork at the expense of the poor. Join with them! The Mass Peoples Budget Campaign is a good local model.

• Contact your elected officials. Sign onto the letter from the Coalition for Human Needs with other groups here. CHN also created an email form for individuals to email their elected officials directly, found here.

For resources and messaging ideas, including sample tweets and social media posts, visit NAHT’s resource page and 2018 specific resource list. We have assembled in one place key materials compiled by the Center on Budget and Policy Priorities, the National Housing Law Project, the National Low Income Housing Coalition, and the Coalition for Human Needs.

“Trump’s budget will push millions of people from their homes; starve seniors, children and families; and deny health care to millions of people,” said Ed Lucas, President of the National Alliance of HUD Tenants (NAHT), who lives in a resident-owned, HUD-assisted building in Chicago. “People will die if these proposals see the light of day. Congress should declare Trump’s 2019 budget ‘dead on arrival’ instead.”

Trump’s budget proposes to cut 200,000 people from Section 8 Vouchers next year--10% of the total--and an astounding 37% from Public Housing operating budgets, already underfunded at 85% of needs. Trump proposes zero funds to address the $40 billion backlog of needed health and safety repairs in Public Housing. Overall, the $6.8 billion in proposed cuts would be the deepest cuts in HUD’s history.

Trump again proposes draconian rent increases for millions of Americans who receive HUD rental assistance. Trump’s budget would raise rents for most tenants from 30 to 35% percent of income, triple “minimum rents” paid by the most destitute, and eliminate deductions that keep rents affordable for seniors and disabled people. The budget repeals Section 8 Enhanced Vouchers, which would immediately displace more than 30,000 families and seniors across the nation. Overall, rents would jump overnight an average of 20% for 4.6 million households--and an incredible 83% for HUD tenants in Puerto Rico!

“Trump wants to cut taxes for the richest of the rich, paid for by raising rents on the poorest of the poor”, comments Deborah Arnold, 54, a minister and community activist and NAHT Vice President from Atlanta, Georgia. “80% of HUD tenant households are led by women. We, too, demand that Congress reject Trump’s vicious assault on the women, children, elderly and disabled people who live in HUD housing.”

Trump will soon propose “work requirements” for HUD rental assistance, Food Stamps and Medicaid. NAHT leaders denounced these proposals as administratively wasteful, ineffective and punitive, especially in the absence of jobs, training and resources to make them work. “Trump lives in public housing--the White House. Will a work requirement be imposed on him?,” asked Geraldine Collins, 63, a disabled, retired medical administrator and NAHT VP/East who lives in senior housing on Manhattan’s Upper West Side. “Congress should make Trump do something useful, rather than tweeting, playing golf, watching cable TV, and destroying the nation’s social safety net.”

Beyond that, Trump has proposed to slash virtually every mandatory “safety net” program for the American people, including Medicaid, Medicare, and Food Stamps. Trump’s cuts would pay for a net $1.5 trillion tax cut for the 1% and giant corporations, and huge hikes in the Pentagon budget, including first strike nuclear weapons, increased war spending, and the Wall.

Comments Rachel Williams, 62, an Army widow, minister and long time community activist in Beaumont, Texas and NAHT Board VP/South: “Adding millions to the ranks of destitute and homeless people is deeply cruel and un-American. Homeland security begins with a home!”

Adds Eleanor Walden, 87, a long time civil rights and social justice activist living in senior housing in Berkeley, California, “Trump’s budget and other actions criminalize immigrants, poor people and people of color while subsidizing division and hate among the American people. Trumps budget is a recipe for war, inequality, racism, and fear.

“Congress should instead pass the Peoples Budget to embrace prosperity, peace, unity and hope for our future.” The Congressional Progressive Caucus is expected to release its FY 2019 Peoples Budget alternative in March.

Founded in 1991, NAHT is the national tenants union representing 2.1 million families in privately-owned, HUD assisted multifamily housing. NAHT’s mission is to empower residents to save and improve their homes as affordable housing.

lease join Busboys and Poets Books as they welcome author and long time NAHT conference attendee Glyn Robbins of Defend Council Housings in the U.K. to Takoma to discuss his new book There's No Place: The American Housing Crisis and What It Means for the UK." If you are in the D.C. area please show your support by attending this event.

There's No Place was released on 16th June, two days after the appalling - and preventable - Grenfell Tower disaster. The book comes at a critical moment for the future of housing in the US and UK. The election of Donald Trump makes a property developer "the most powerful man in the world". For Americans with low-incomes, the limited help to keep a home they can afford is at risk. In the UK, housing is at a crossroads between a revival of non-market housing or letting the market rip, a choice made more stark by Grenfell. There's No Place tells the story of resistance and struggle at local level through the voices of those fighting to save their homes. Each chapter covers a different aspect of the trans-Atlantic housing crisis based on detailed field research and interviews in Boston, New York, Chicago, Seattle, San Francisco, New Orleans, Atlanta and Washington DC.

You all may have heard about long time affordable housing advocate, NAHT member, and board present Charlotte Delgado passing away recently. Glyn, who knew Charlotte was kind enough to post a tribute to her on his website which can be viewed here 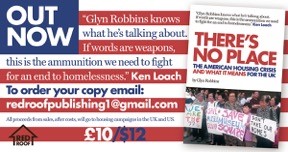 Glyn Robbins is a London (UK) - based housing worker and campaigner.  His articles about housing and urban policy appear regularly in the labour movement and housing press and have also been published by The Guardian.  Glyn is an active trade unionist and socialist and has a PhD in urban policy.  This is his first book.

Glyn is a memeber of Defend Council Housing in the UK which is NAHT's sister organization. HE has been been attending the NAHT conference for more than a decade and NAHT was excited to launch the book at this years 25th anniversary conference. In the book it highlights NAHT affiliates and leaders like Charlotte Delgado. He really tells our story-NAHT's Story!

Half of the proceeds will go to NAHT. To purchase the book you can go here or

2. By PayPal to Red Roof Publishing

Another NAHT victory!   HUD has published the special Fact Sheet which Public Housing Agencies will now be required to issue to tenants when owners convert to Enhanced Vouchers.  As sought by NAHT, the Fact Sheet emphasizes tenants’ Right to Remain in the property, as long as they are compliant with the lease and the building remains rental housing.

Click here for HUD's new brochure.   It is also available in 13 languages.

At HUD’s request, a Special NAHT Task Force of tenant leaders, VISTA Volunteers and staff organizers reviewed HUD’s draft and offered recommendations in August 2016.  Much of our recommendations made it in!   Among other things, this is a major accomplishment of NAHT”s VISTA Volunteer project with Equal Justice Works.
Thanks again to Jenny Tang from the Museum Square Tenants Association and New York City tenant leaders who pressed HUD at the June 2016 NAHT Conference, to do something to protect tenants Right to Remain!    Former HUD HQ official Amy Ginger gave a preview of the Fact Sheet, in her visit to Museum Square last October.
Tenant leaders and organizers facing Enhanced Voucher conversions should make sure that the new Fact Sheet is distributed by local Housing Authorities and owners at their buildings.
When we fight, we win!