HUD has published a Memo implementing HUD’s commitments at the NAHT conference HUD plenary on June 10, in response to issues raised by NAHT tenant leaders!

The Memo instructs Owners to:

The 25th Annual NAHT Conference to Save Our Homes was a complete success!

The first day of the conference started off yesterday with registration, snacks and reuniting with old friends. 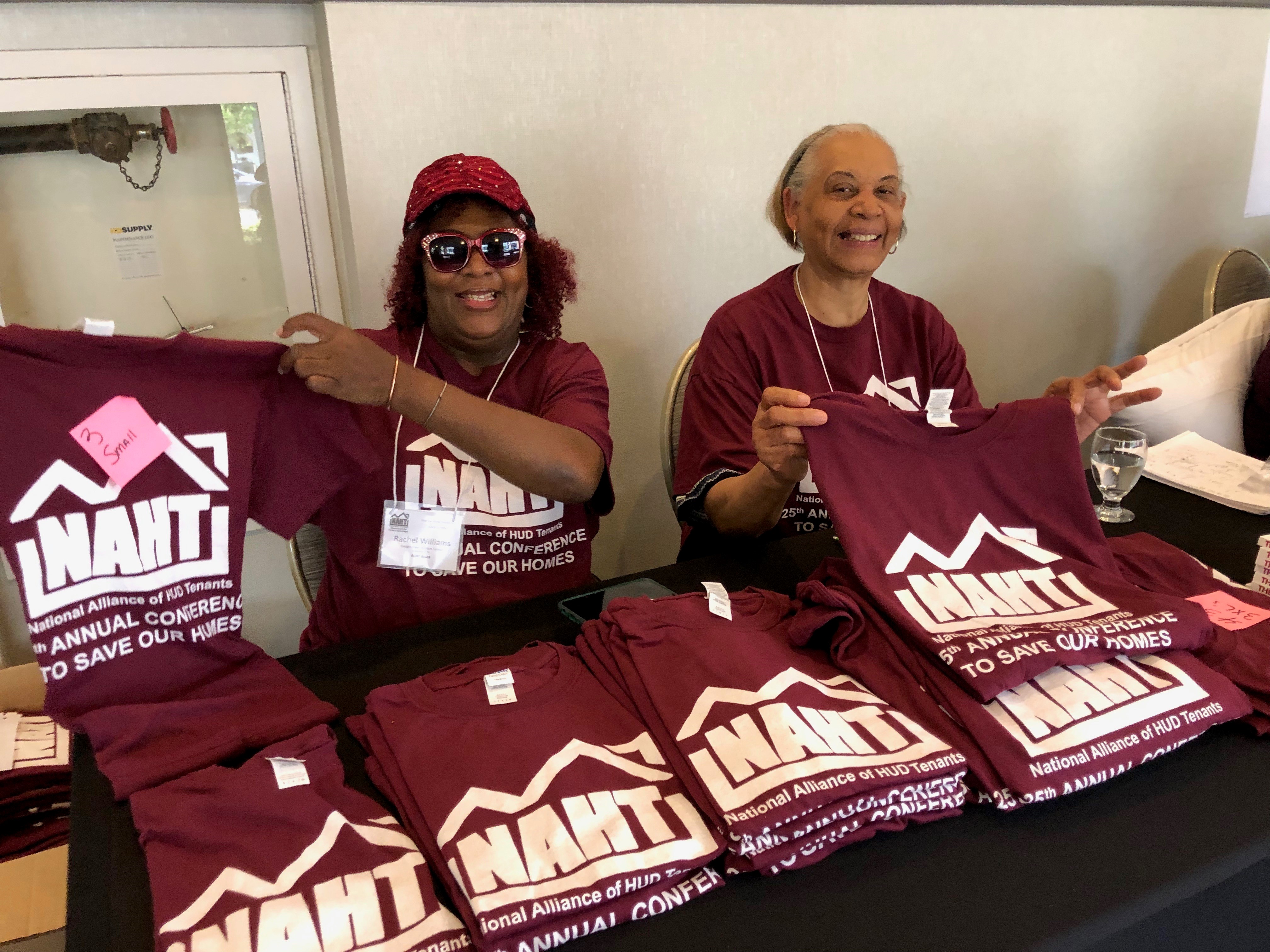 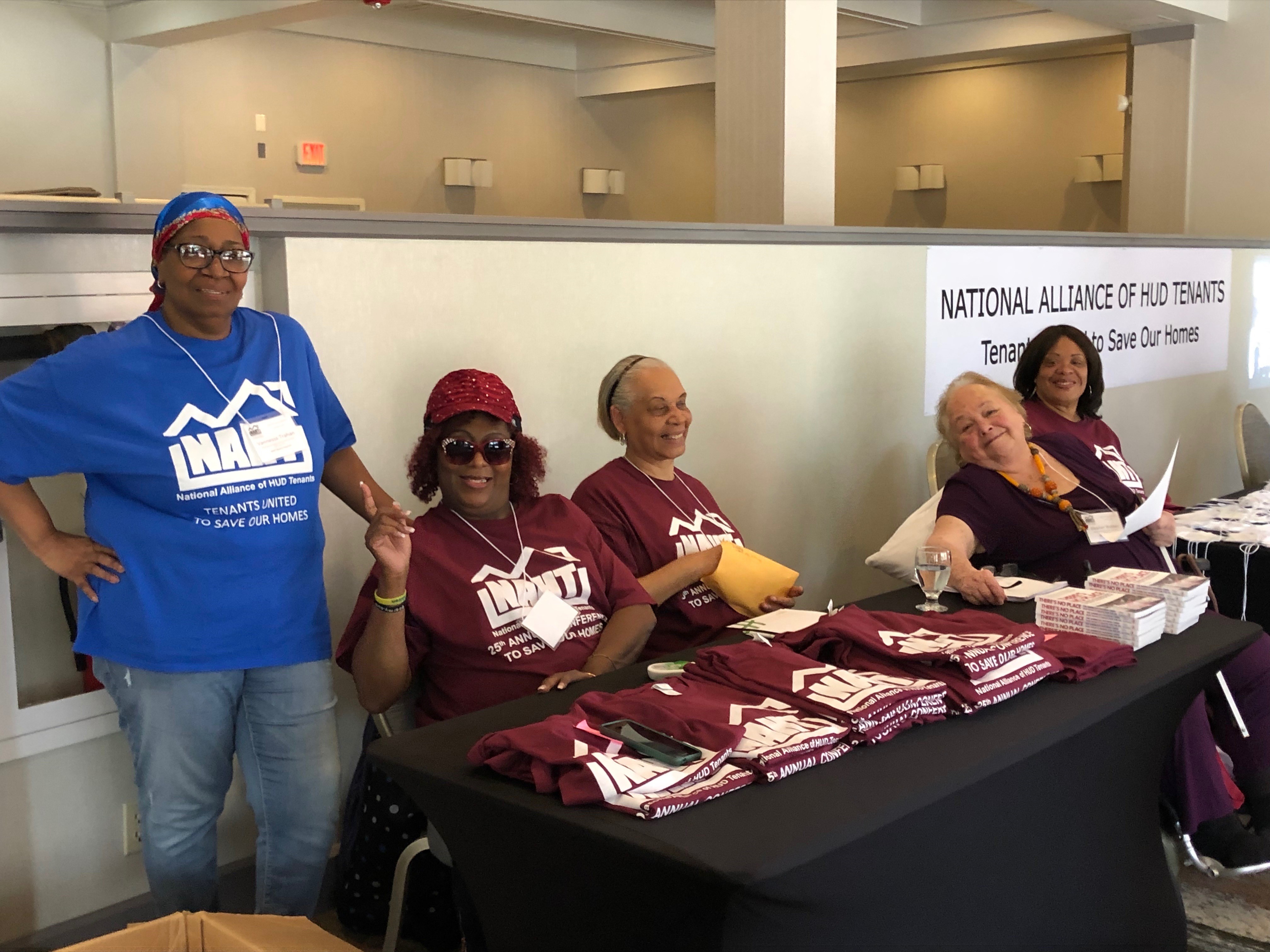 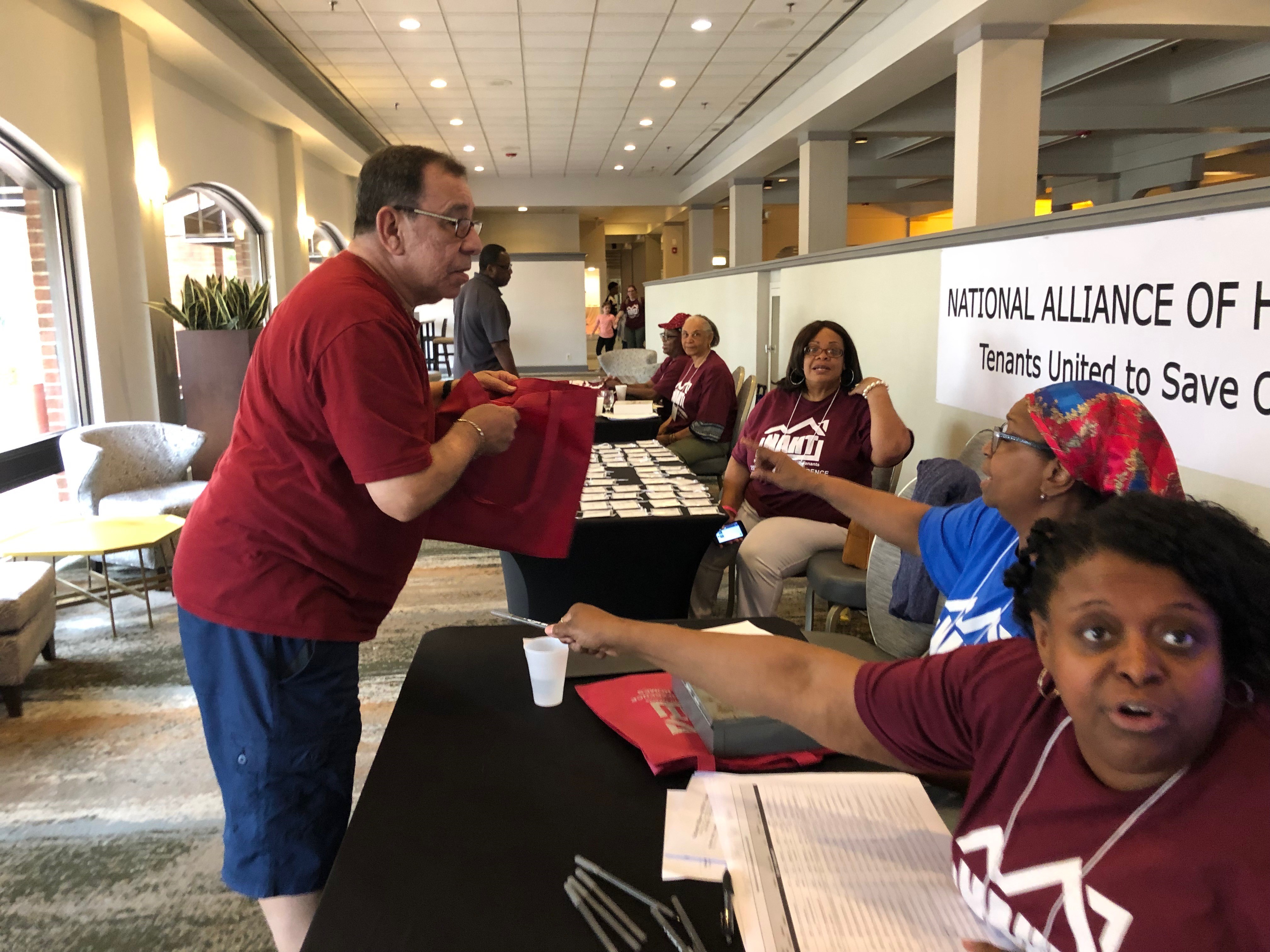 Sunday morning began with our Group Awards Ceremony. Organized tenant groups from around the country were recognized for their struggles to save affordable housing, improve conditions, fight for their right to organize and more! 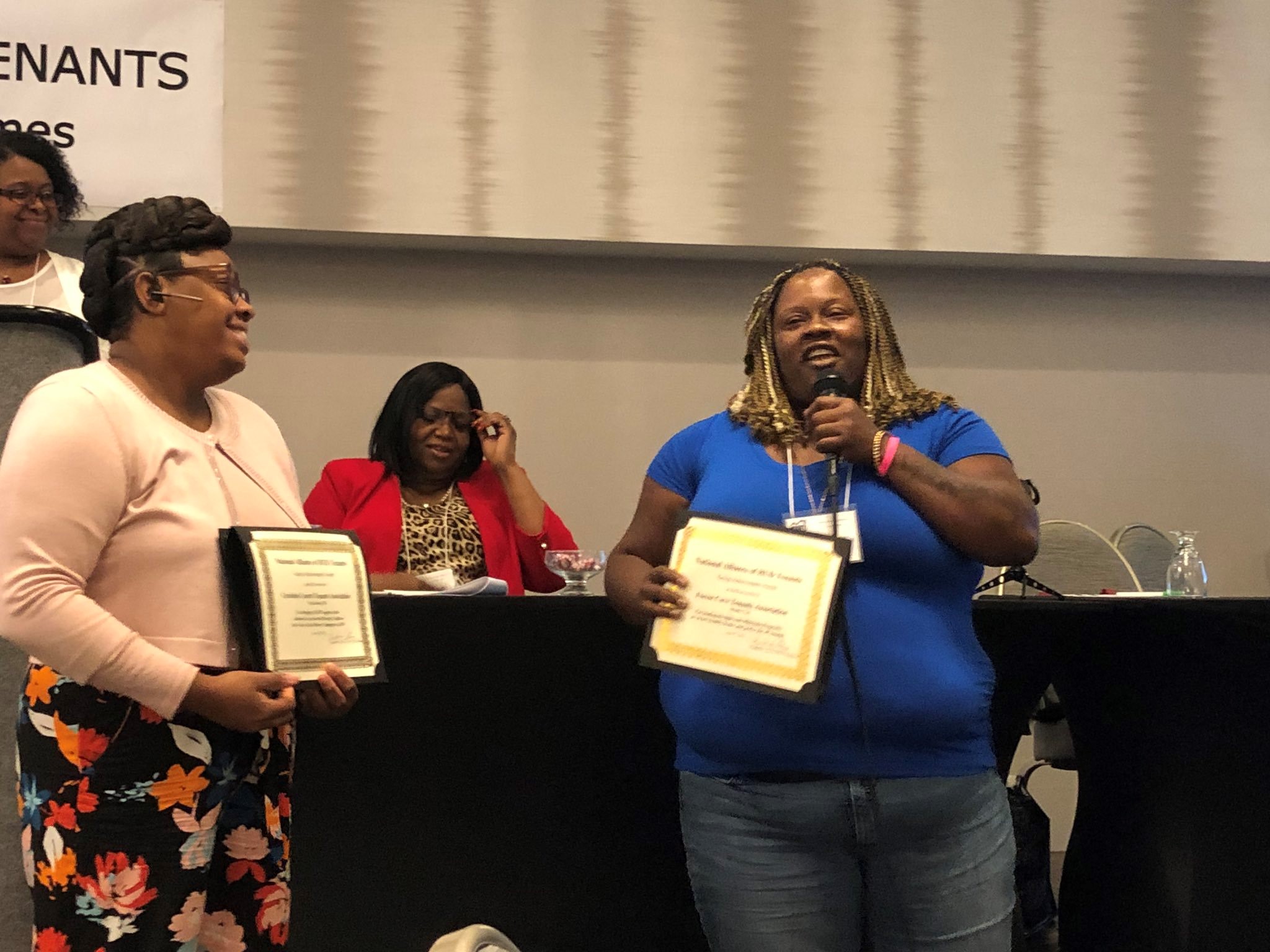 “Everybody in here pays taxes to live in housing that is safe, sanitary and affordable housing, and we’re not gonna stop fighting til we get it!” -Latresa, tenant leader in Atlanta, GA fighting for improved living conditions in her home! 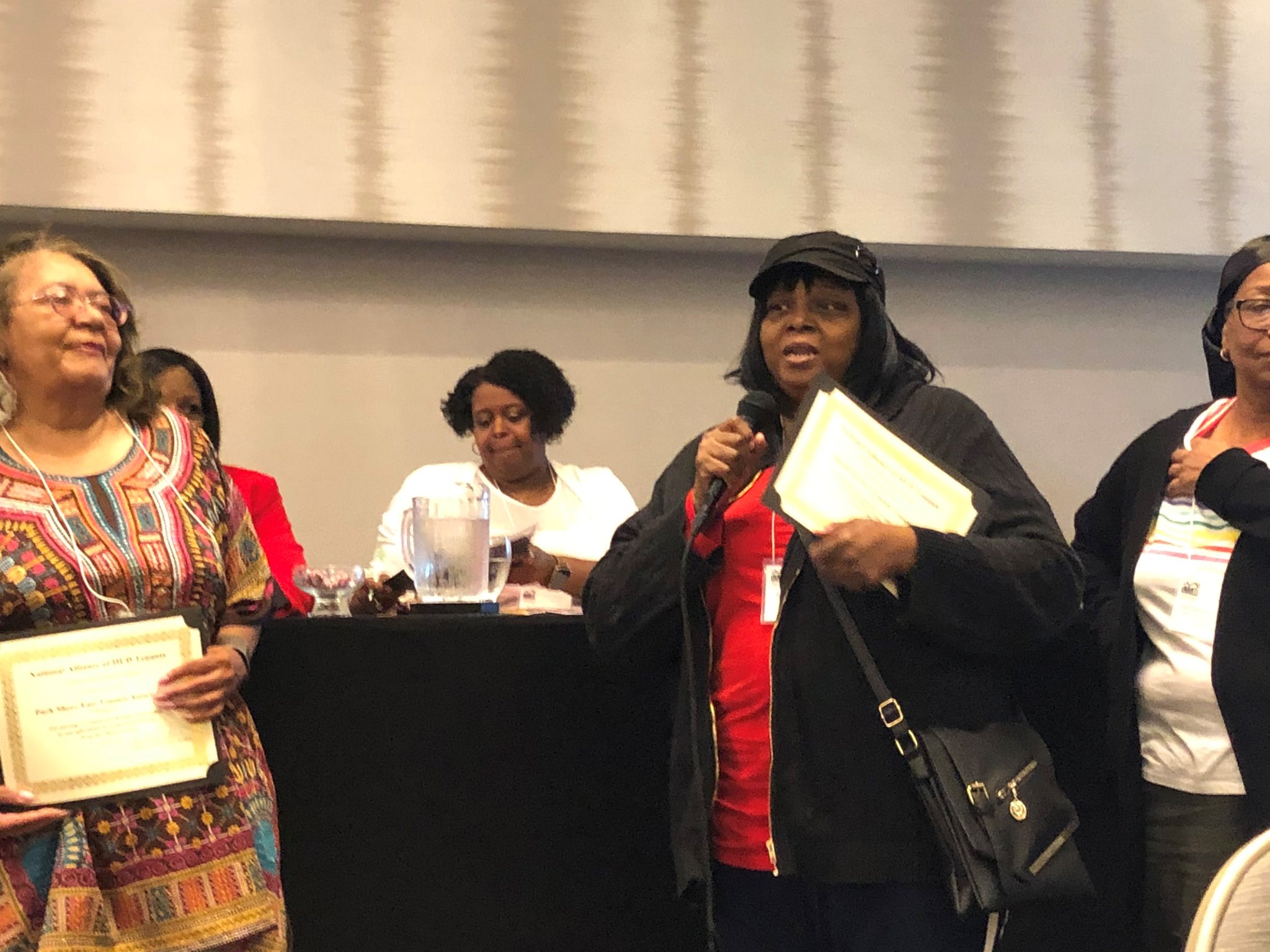 “Management tried to individuate us. I ain’t bowing down to nobody. I’m a resident and I deserve the best.” -Linda from Chicago 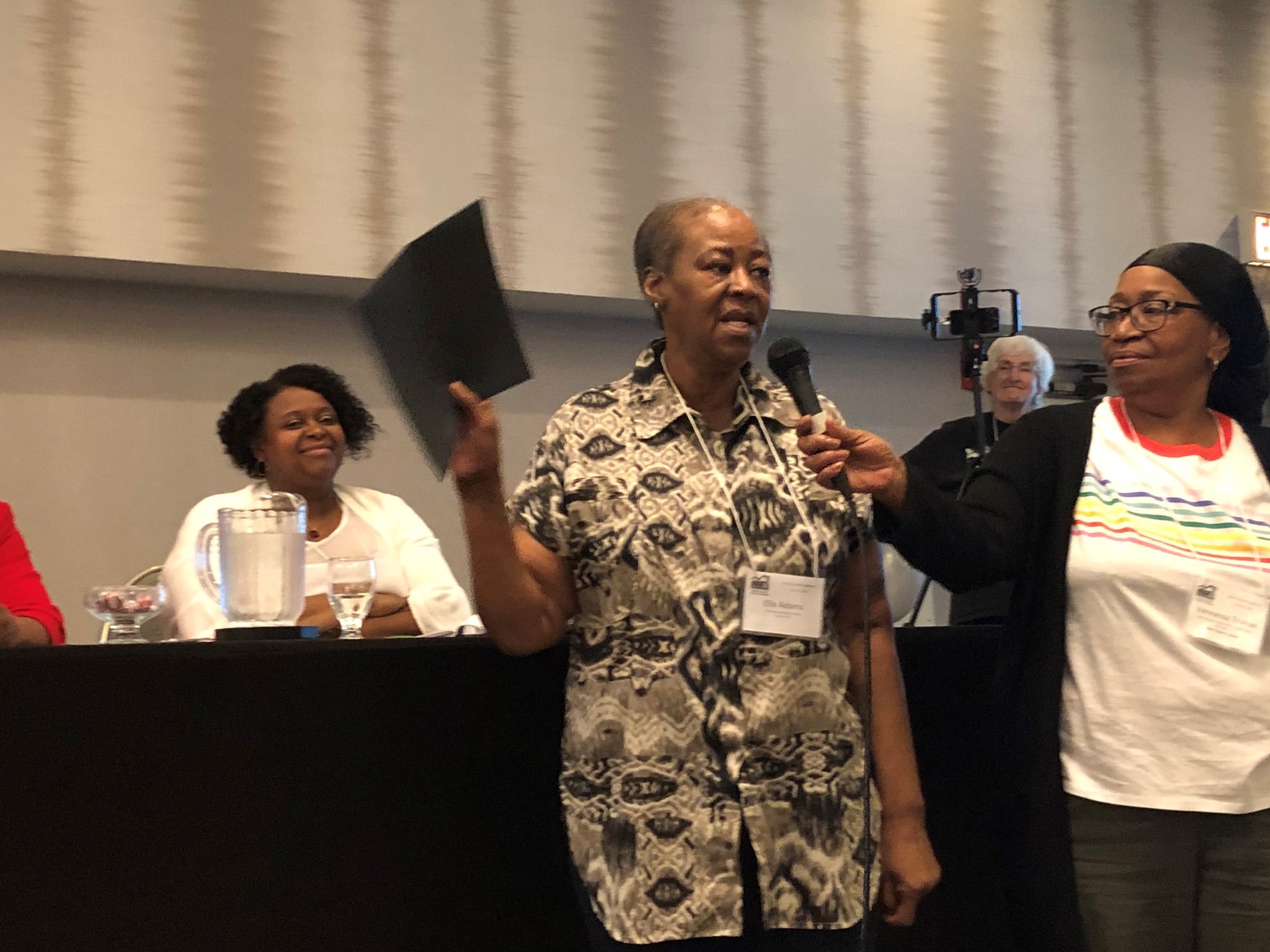 “We wanna make sure no one loses their home in the RAD process.”

After the awards ceremony, we were joined by two keynote speakers, Diane Yentel of the National Low Income Housing Coalition and Molly Parker, investigative reporter from the Southern Illinoisan who reports on subsidized housing condition issues. 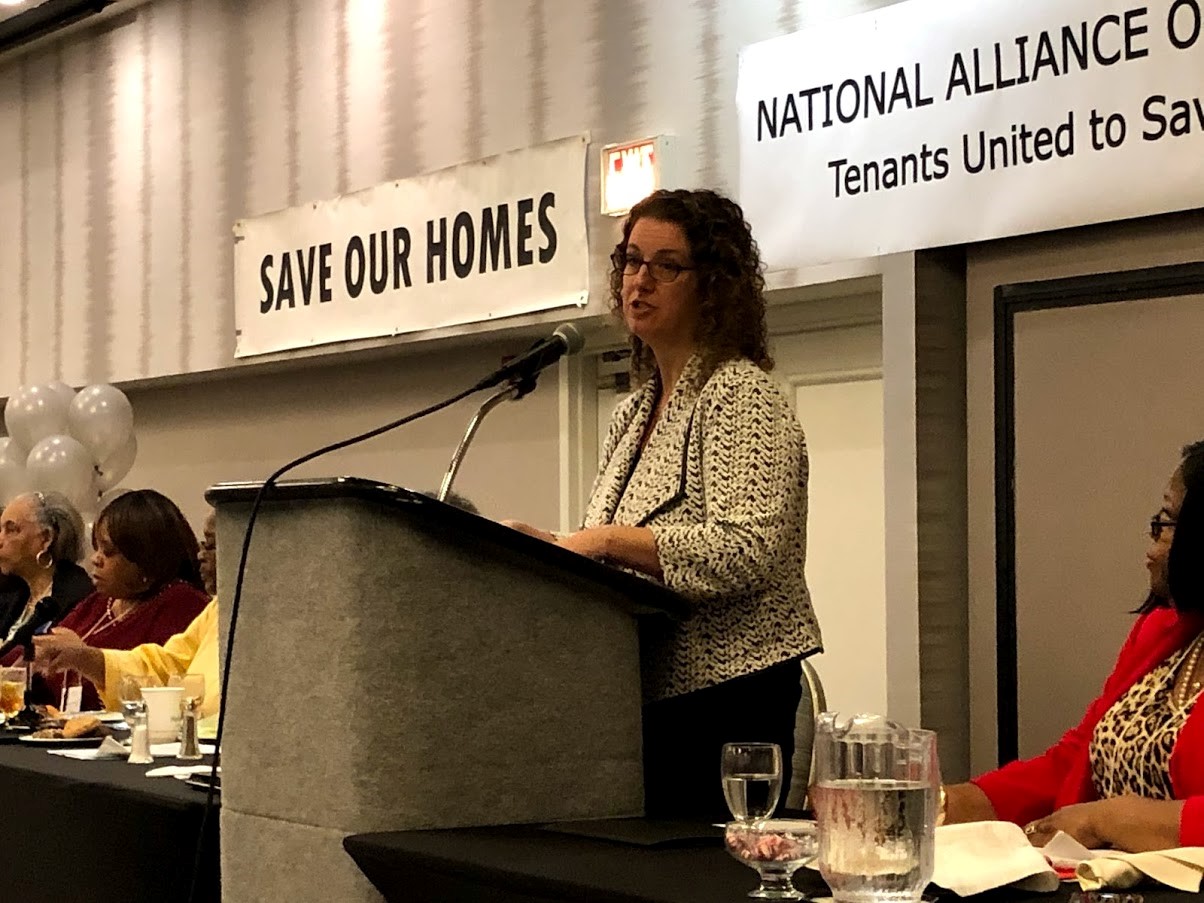 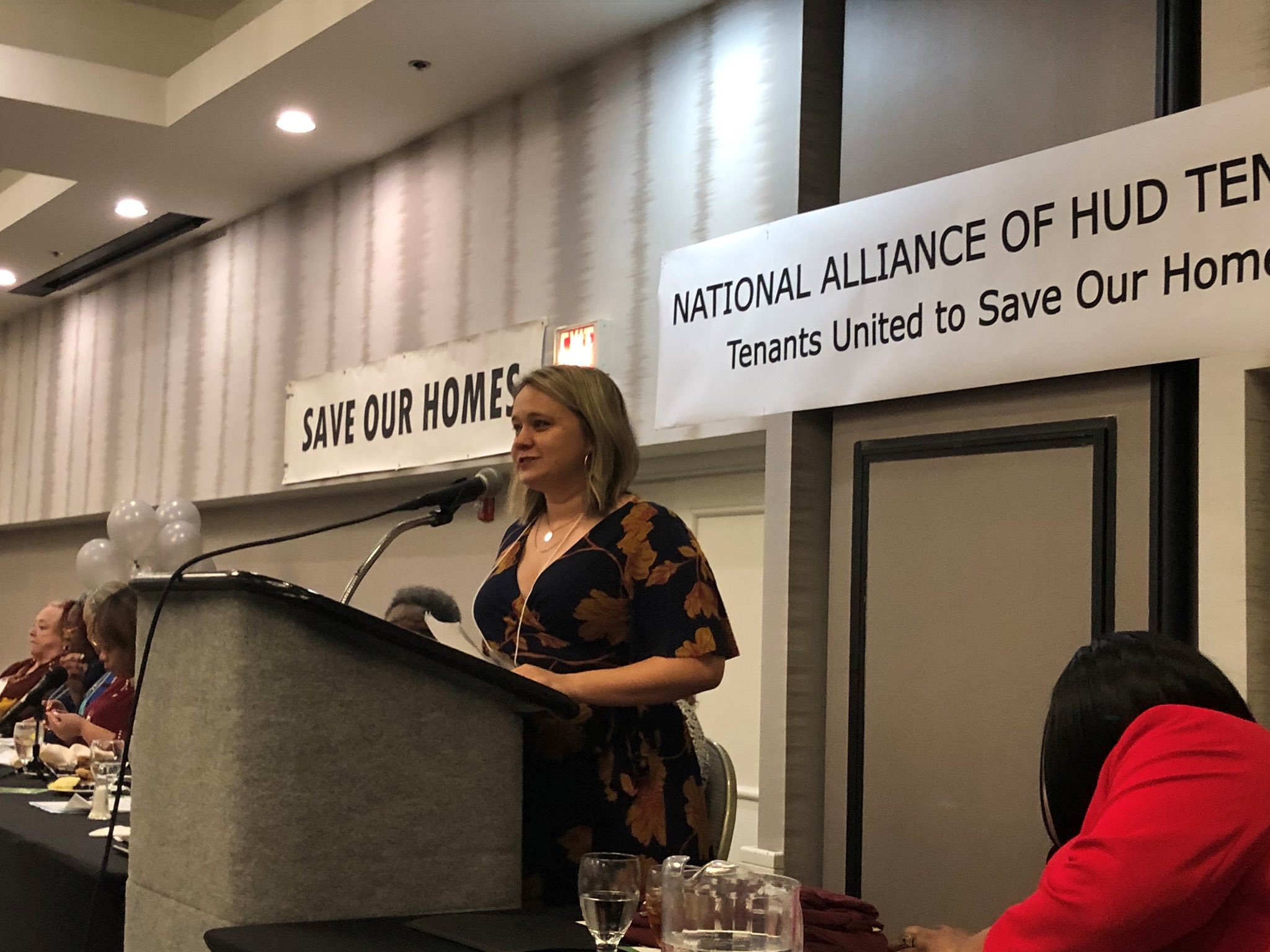 The NAHT Conference boasts 20 tenant-led workshops on a variety of topics. Tenant leaders from around the country led discussions on Section 8 contracts, how to start and sustain a tenant group, REAC reform, how to win repairs, security with justice, fair housing, resident ownership, gentrification and displacement and many more. We got the opportunity to talk to each other, learn from each other and left feeling empowered to take what we learned back to our buildings. 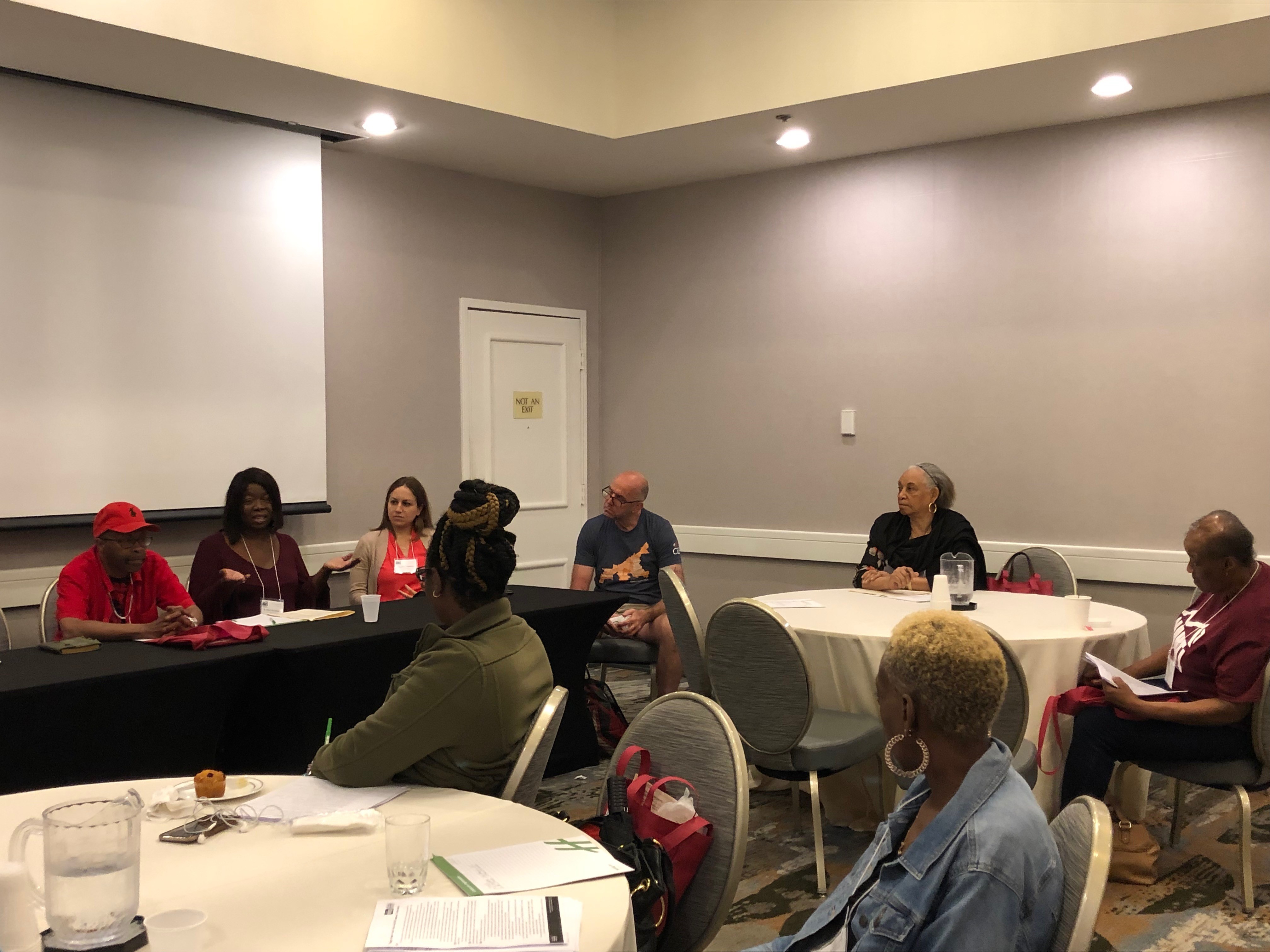 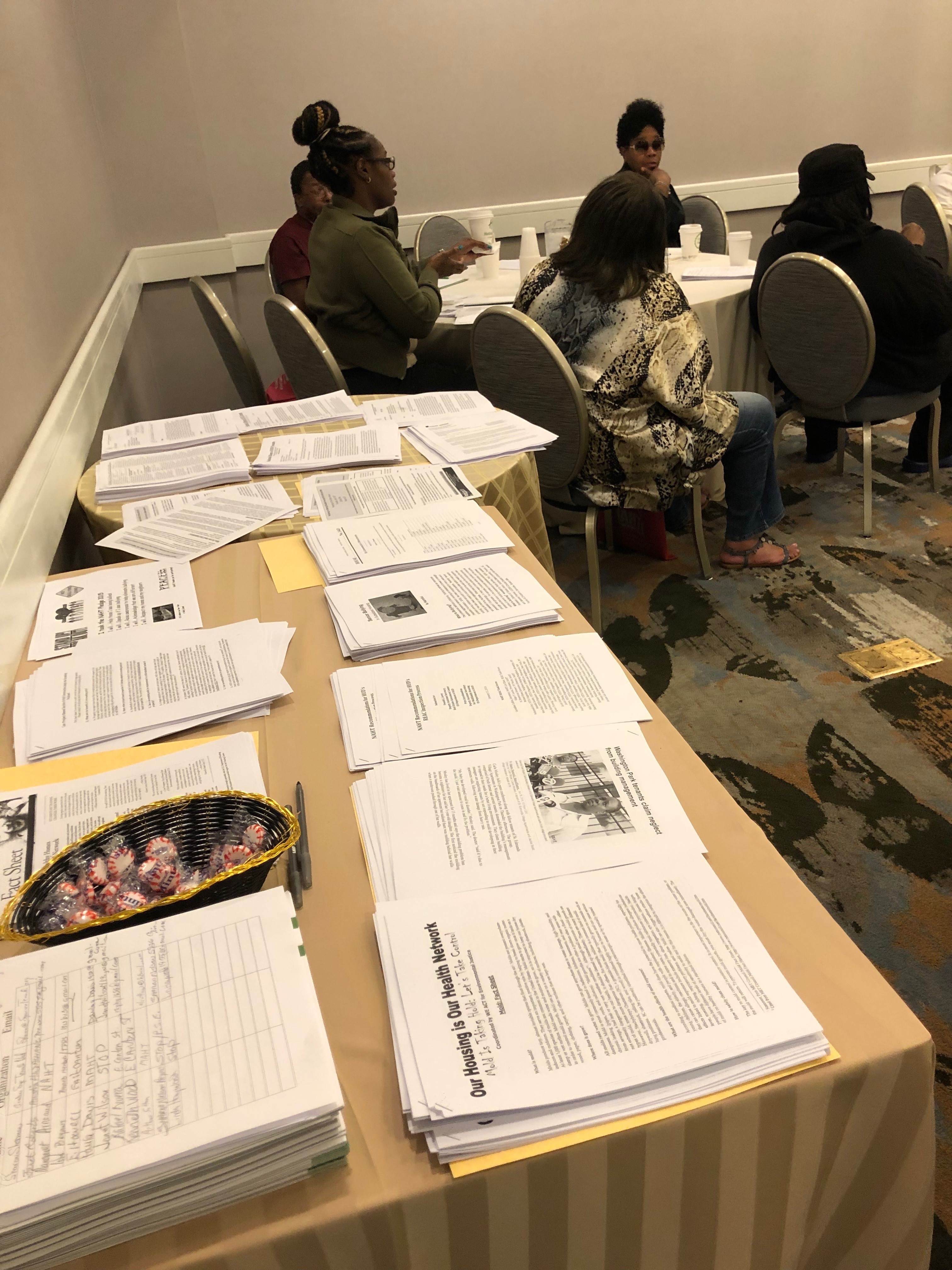 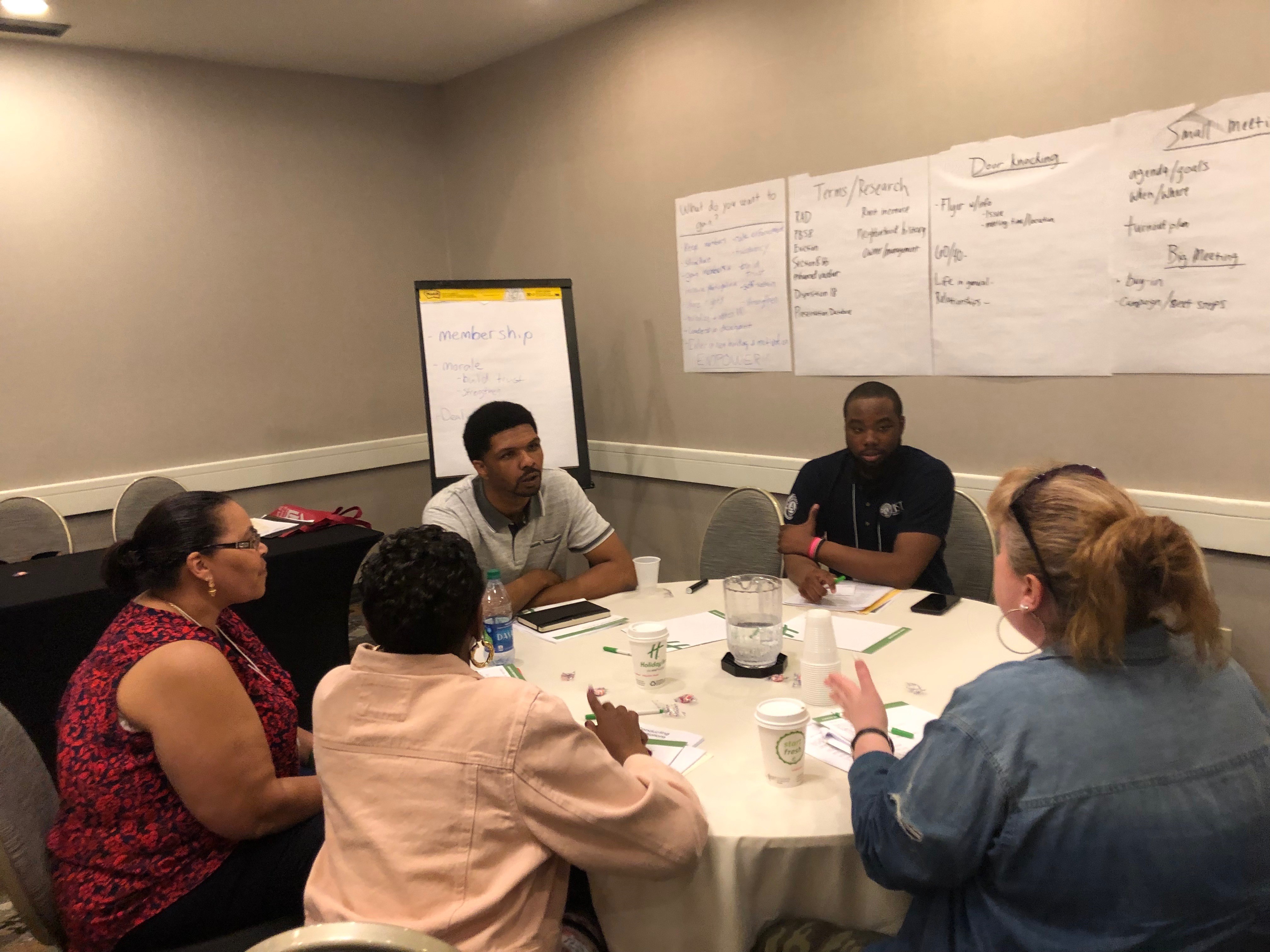 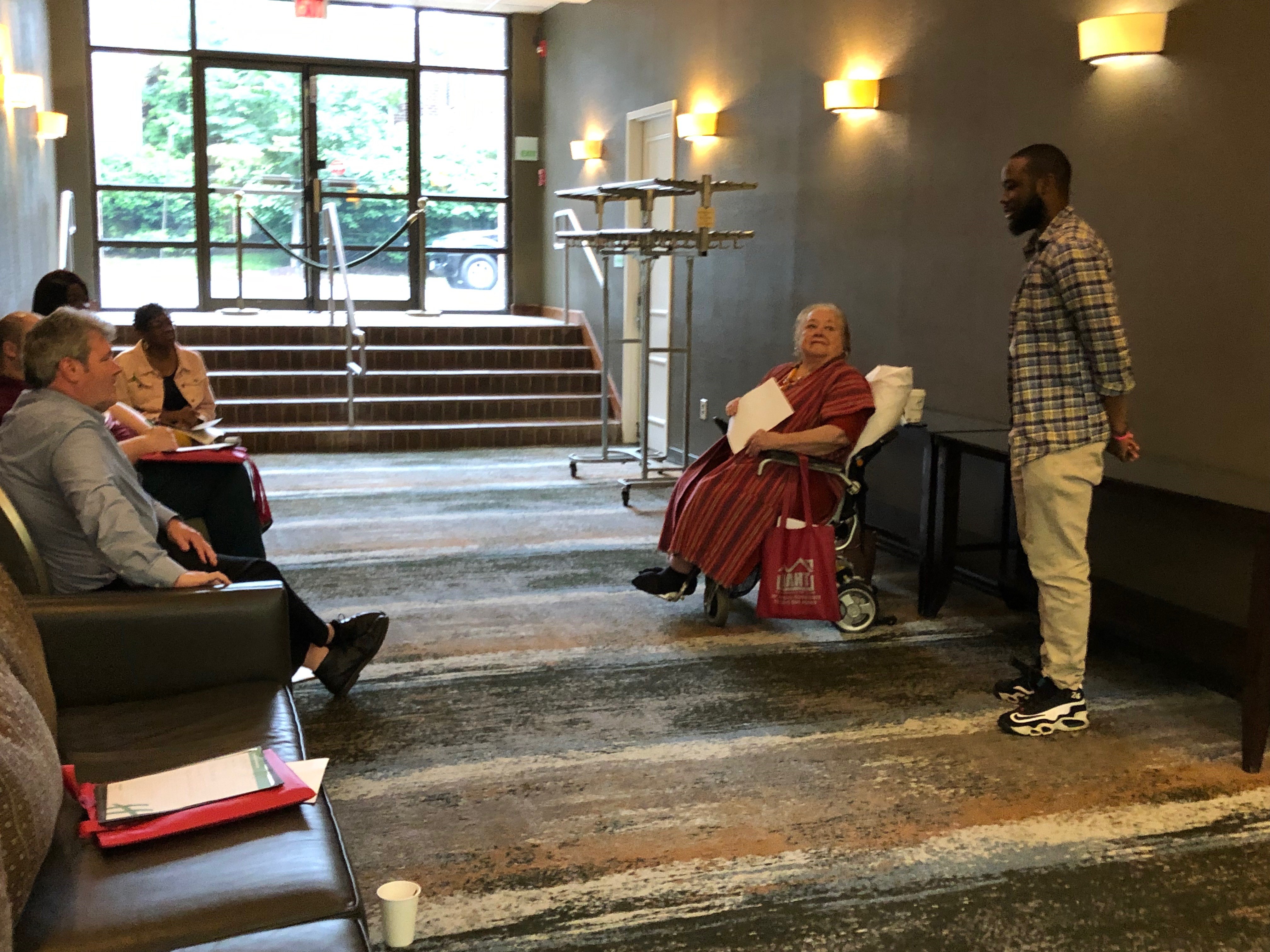 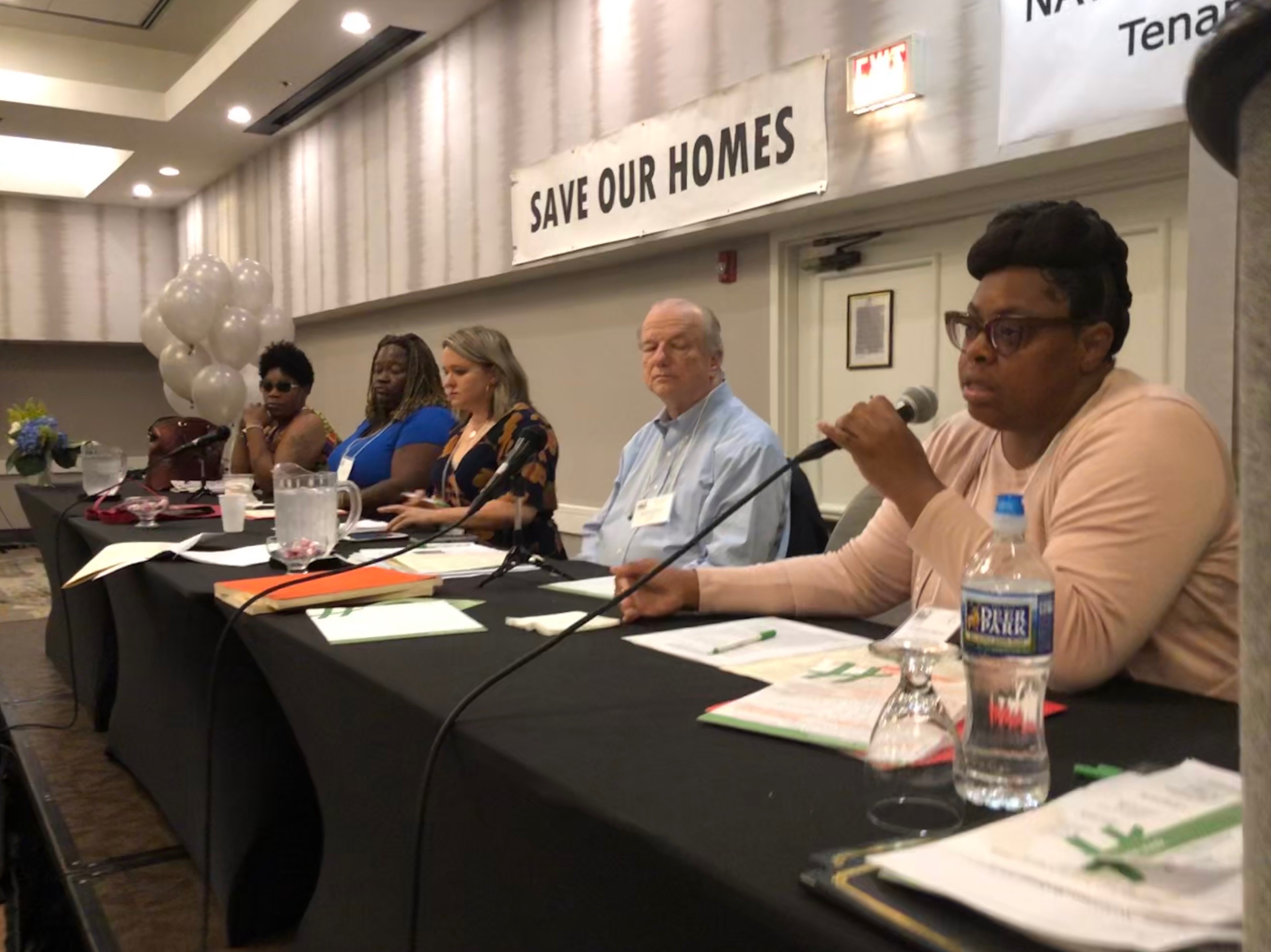 Every year, NAHT meets with top HUD officials to press our agenda on tenant involvement in the REAC inspection process, management oversight process and funding for tenant organizing. Thank you to all HUD officials who attended! See our proposals here! 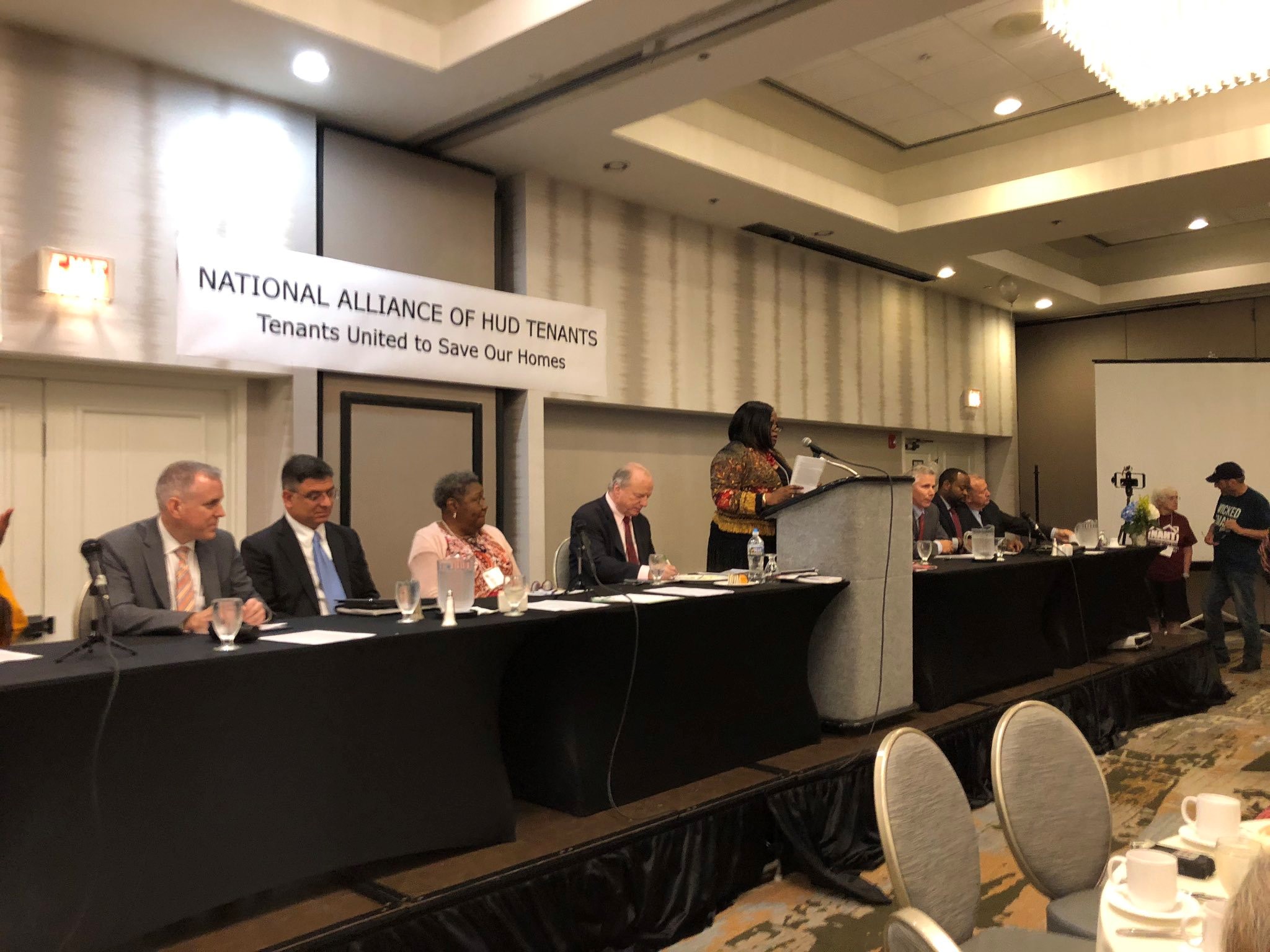 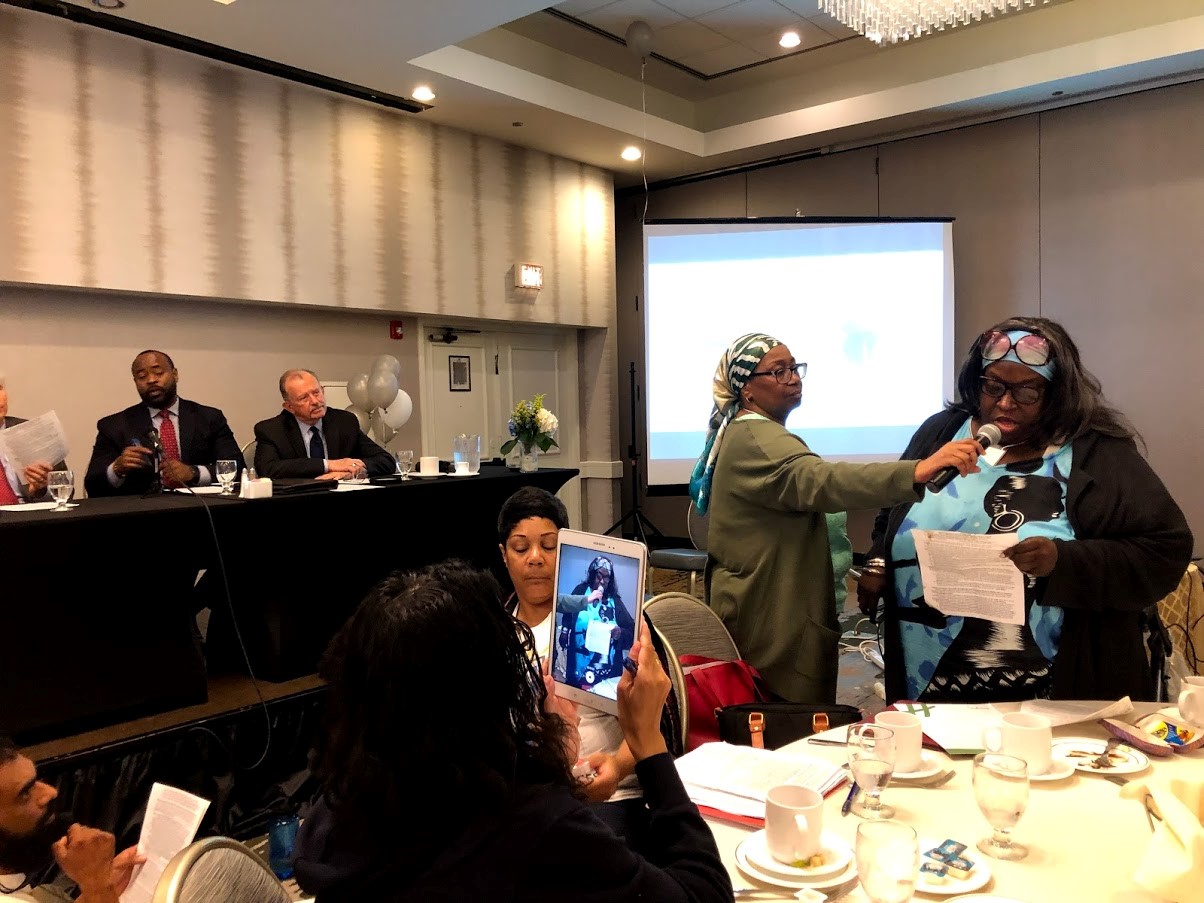 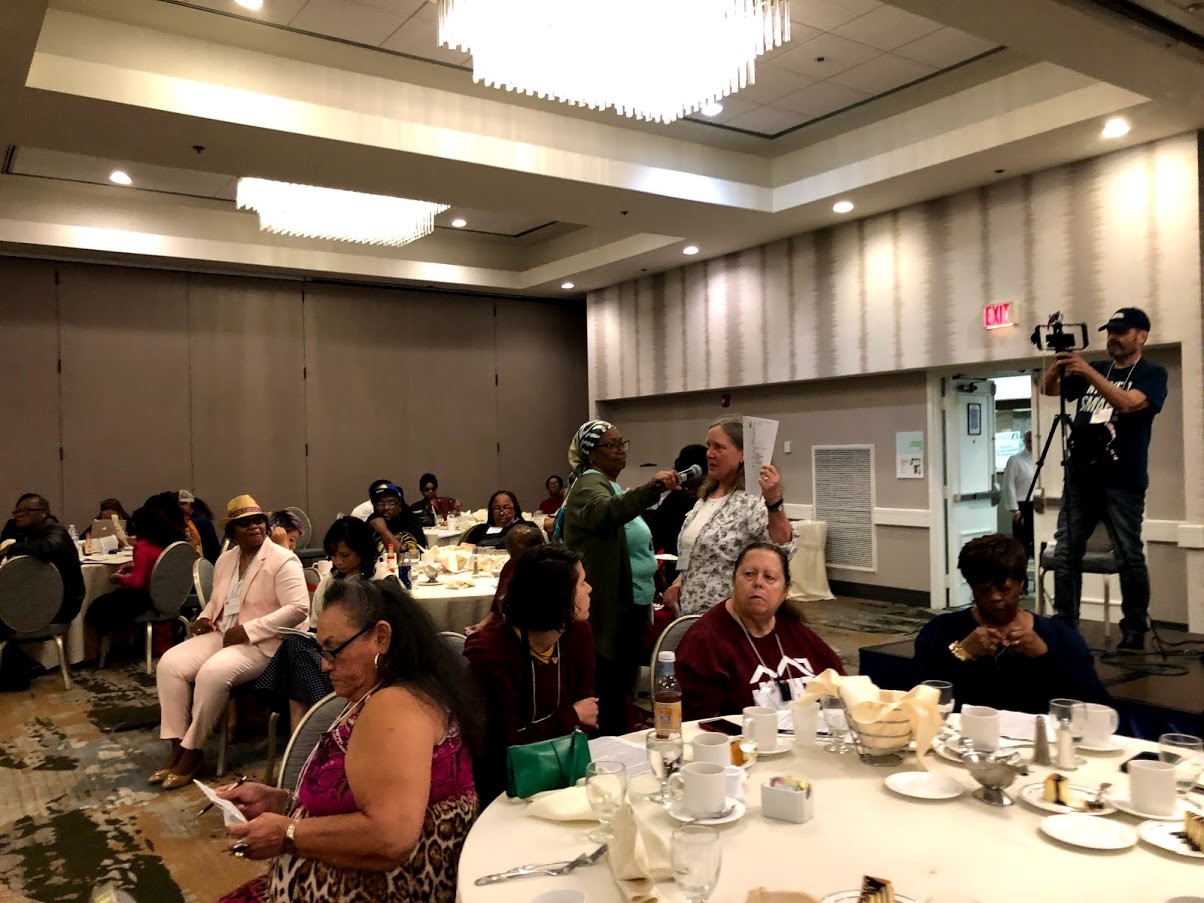 The final day of the conference is our legislative advocacy day! In the morning, tenants presented our legislative agenda, which a can be found here, which includes tenant empowerment and REAC reform provisions, to legislative aides from Congressional offices from both the House and the Senate. 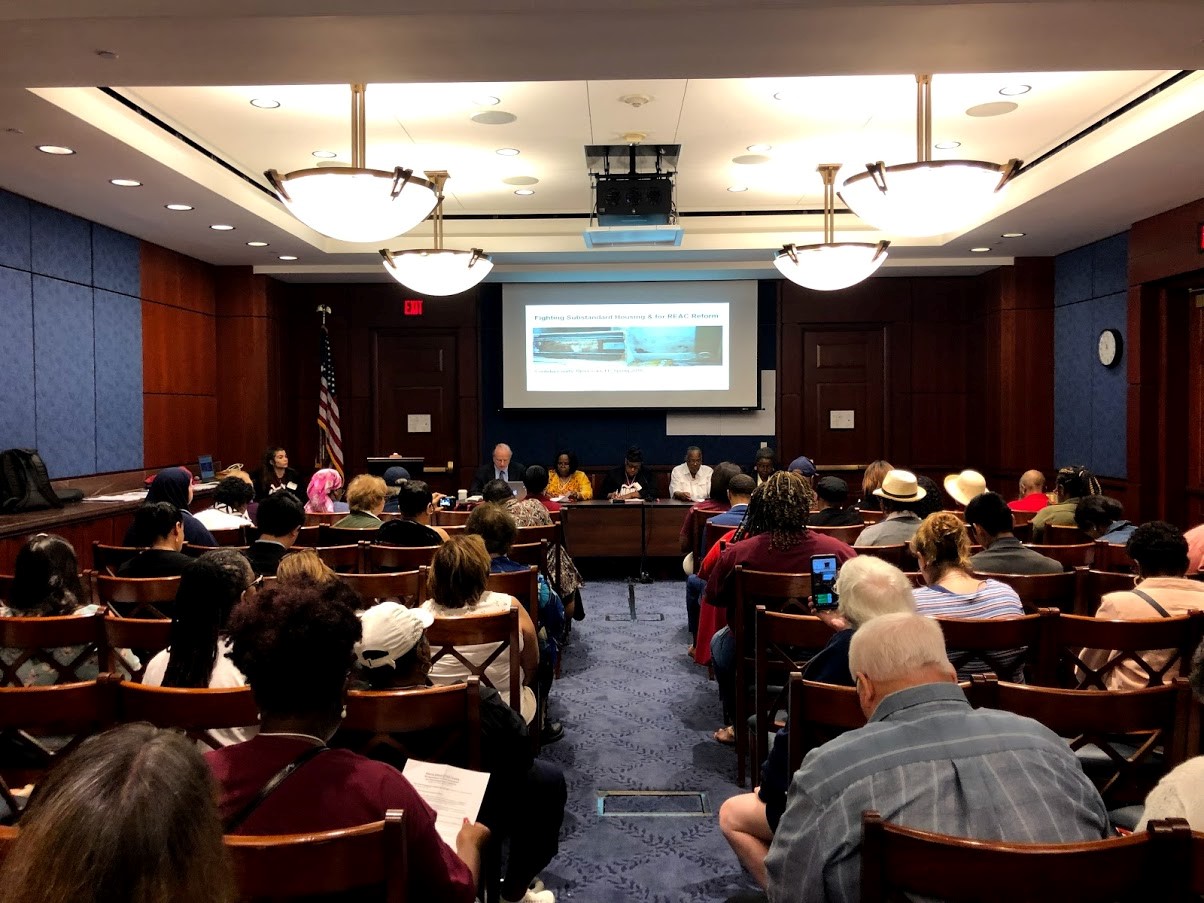 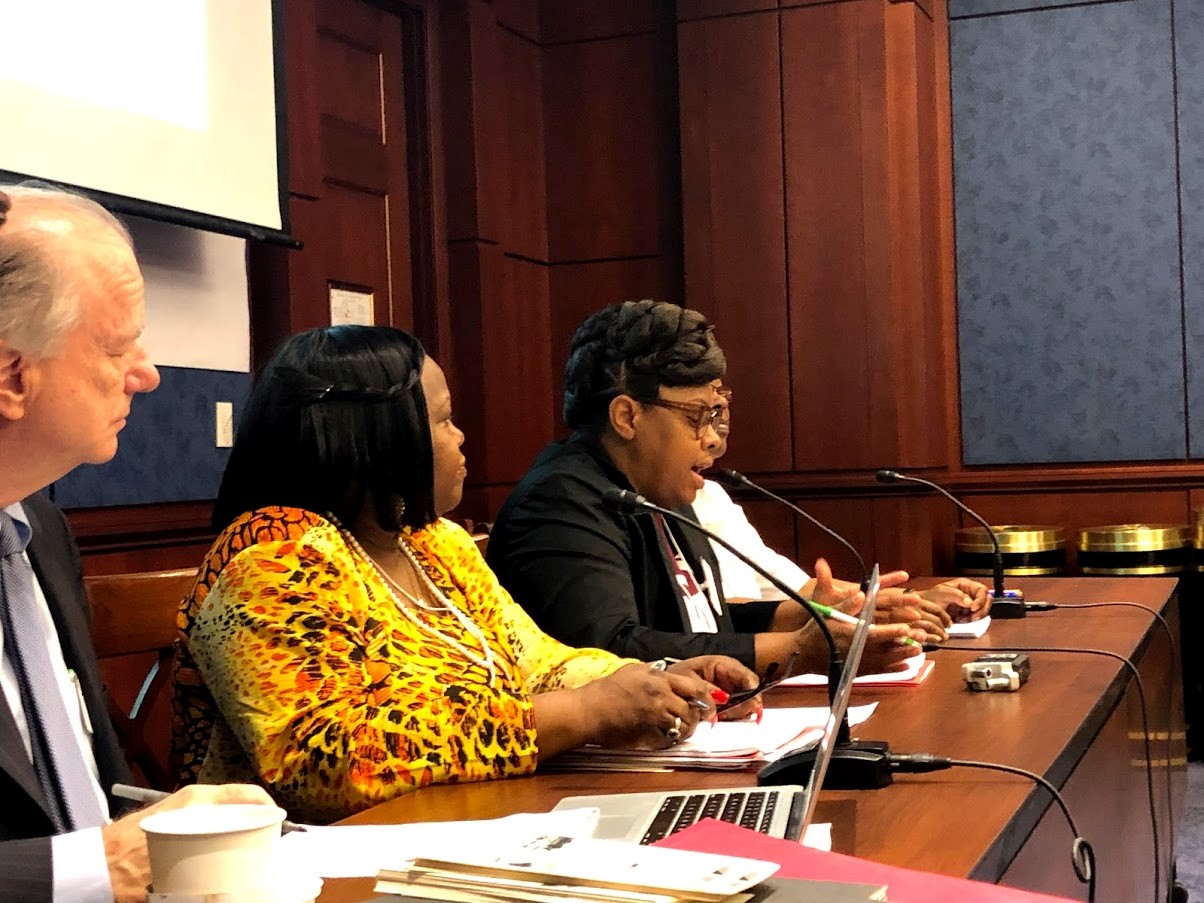 Then we got visits from several special guest allies! 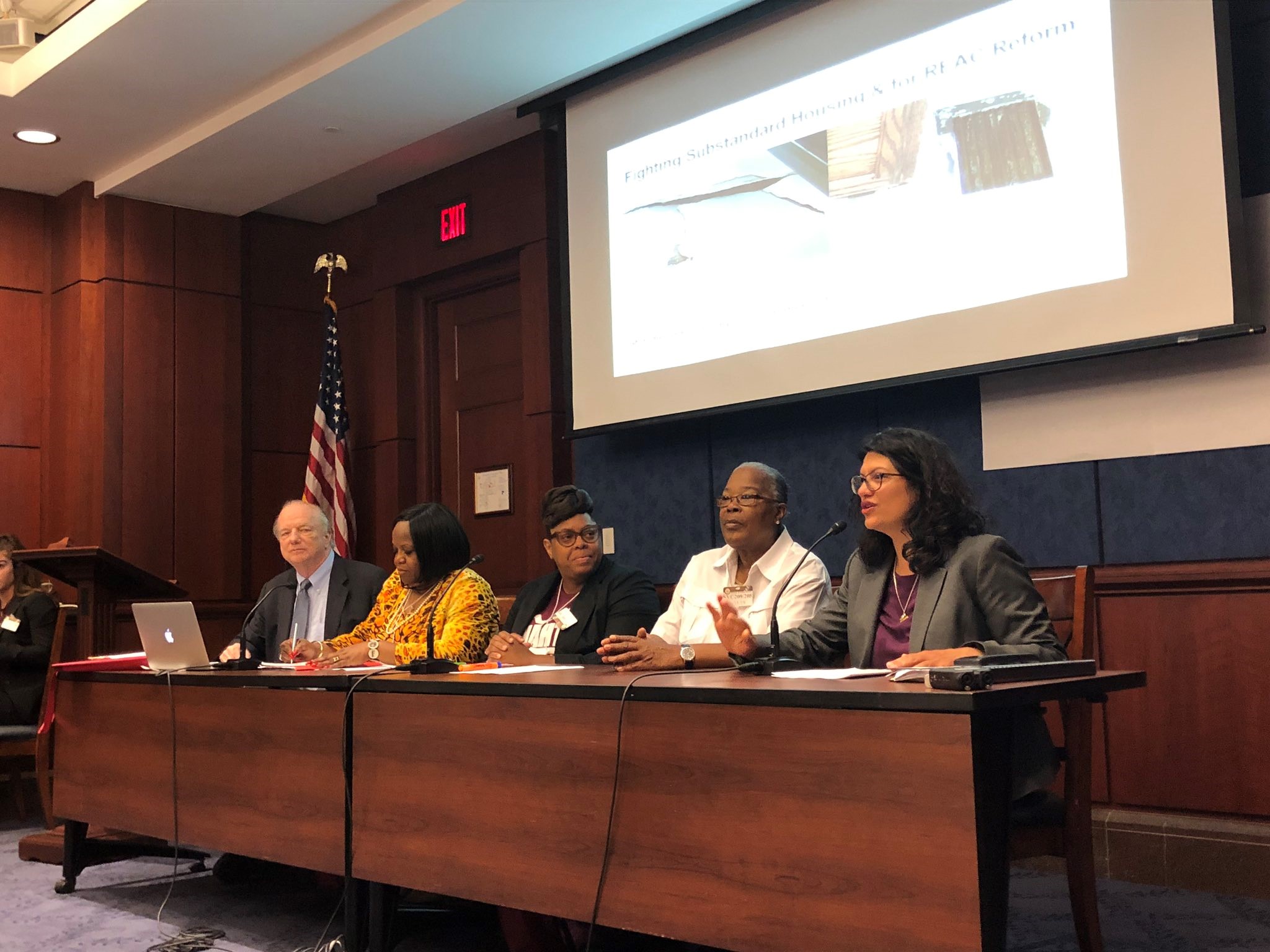 Congresswoman Rashida Tlaib (D-MI) believes in the power of rent withholding to enforce housing standards and so do we! Our bill would strengthen rent withholding for HUD tenants by withholding HUD’s portion of the rent when tenants go on rent strike in substandard buildings! 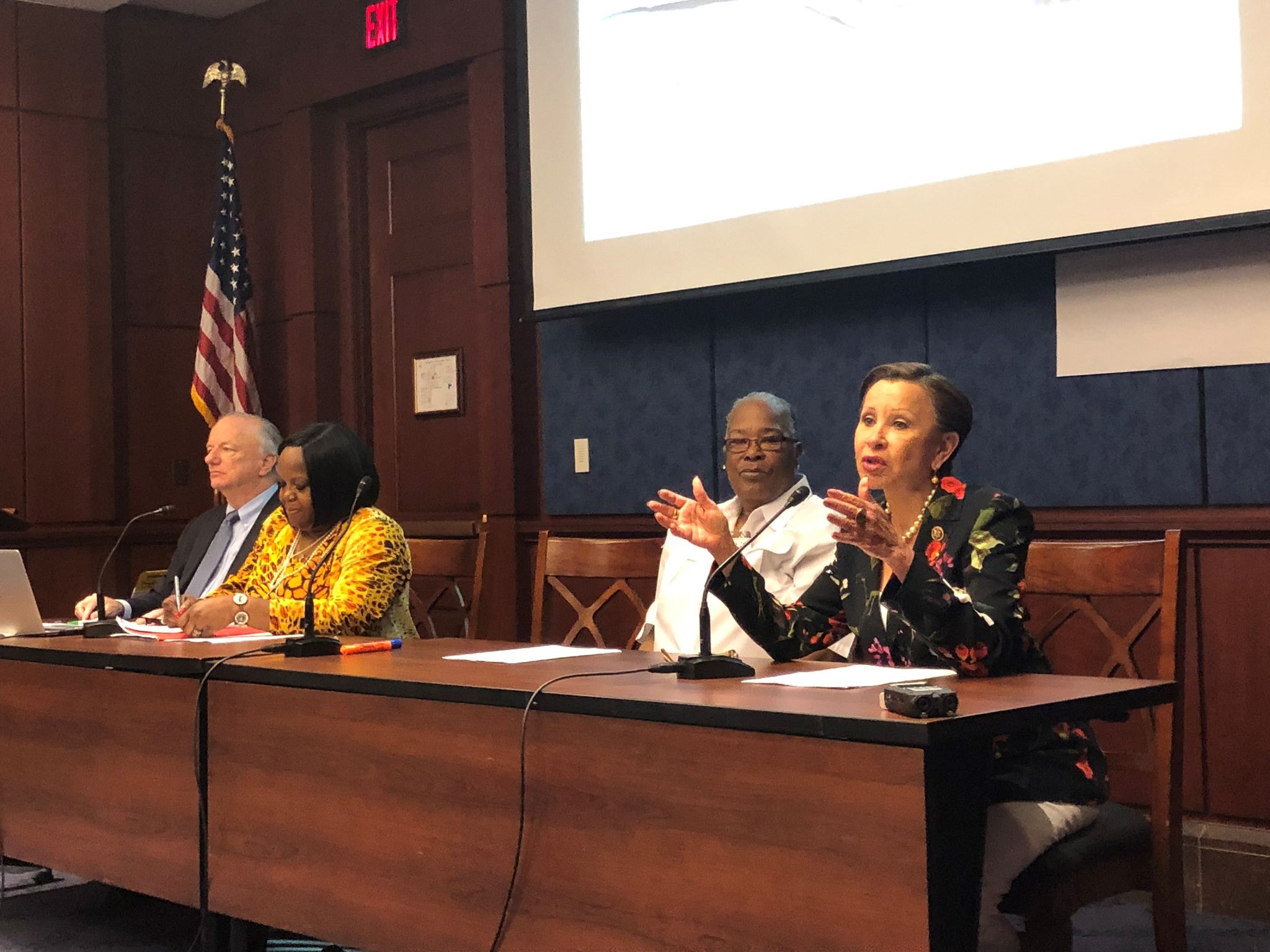 Congresswoman Nydia Velazquez (D-NY) longtime supporter of NAHT, spoke on the importance of full funding for public housing, project based Section 8 and other HUD programs. It should be the mission of our nation to take care of the most vulnerable! 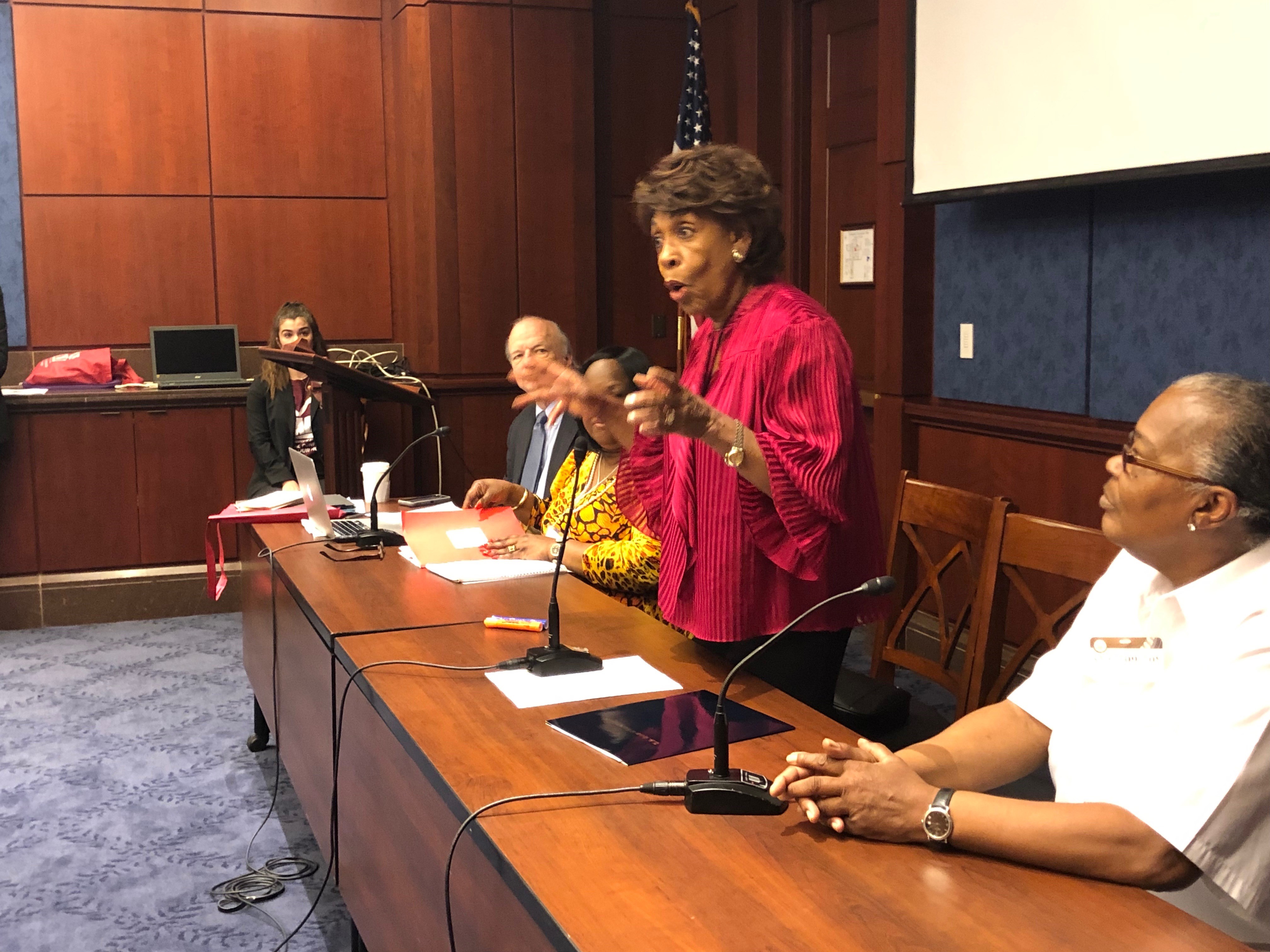 Congresswoman Maxine Waters (D-CA) met with NAHT yet again and encouraged us to keep fighting, keep voting and keep speaking up for ourselves. Thank you for your long time support of tenant organizing, safe and healthy housing and tenant empowerment! 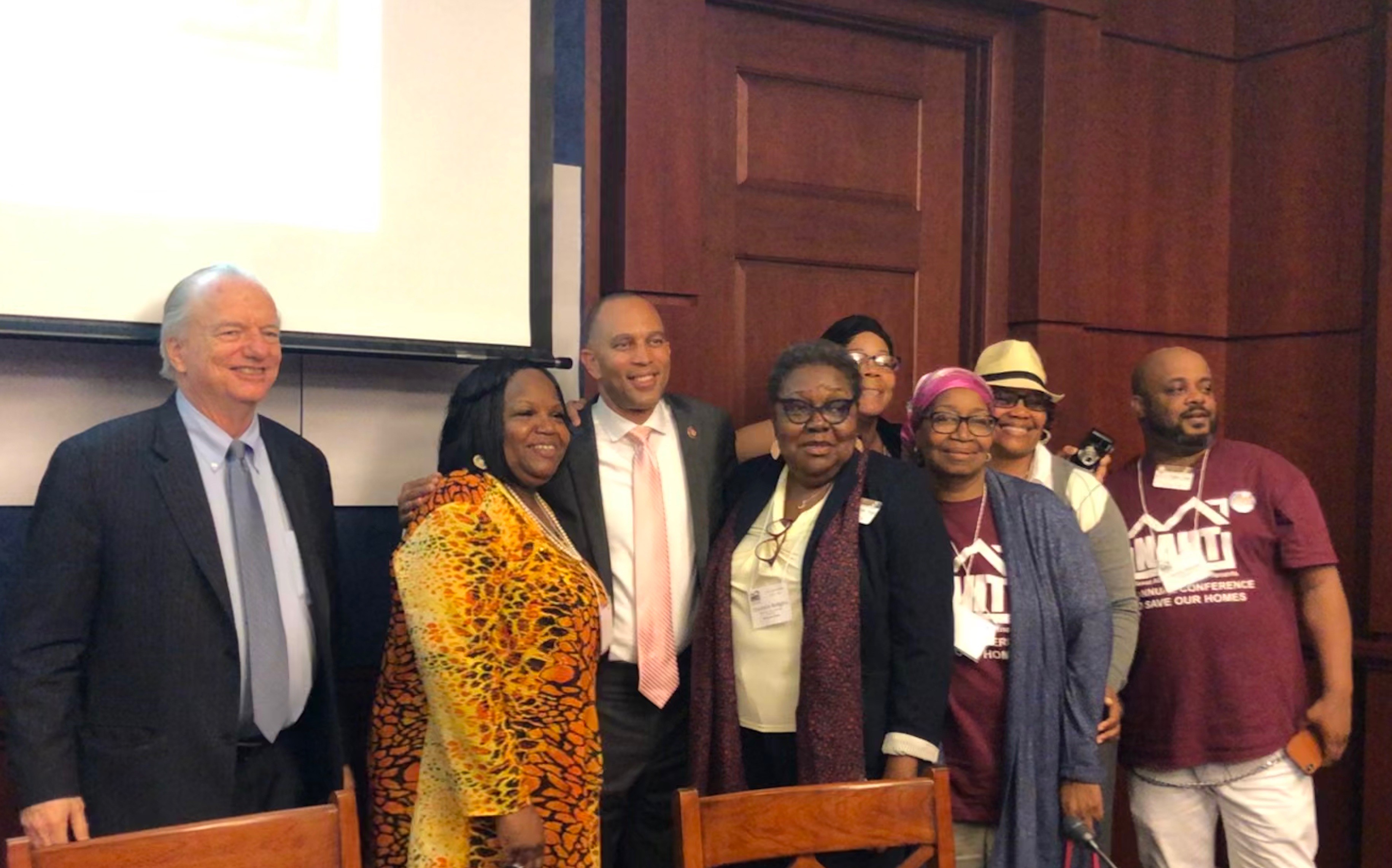 “We have to make sure we’re preserving the affordable housing that exists and we have to raise the living conditions. We have to empower tenants and residents to move us in the right direction.” Congressman Hakeem Jeffries (D-NY) is on board! Thank you for meeting with us!

All in all, another great NAHT Conference is on the books. Thanks to all the attendees, volunteers and presenters for making our 25th Annual Conference a success!

“Its actually worse than last year. Trump’s budget will push people from their homes; starve seniors, children and families; and deny health care to millions of people,” said Geraldine Collins, President of the National Alliance of HUD Tenants (NAHT), who lives in a senior housing development in Manhattan.   “People will die if these proposals see the light of day.   Congress should declare Trump’s 2019 budget ‘dead on arrival’ instead.”

Added Collins, “The recent shutdown crisis led by Trump caused millions to panic that they would be evicted because HUD and USDA funds would run out for their homes. Landlords are now warier about taking Section 8 tenants, and housing authorities are under severe pressure to sell off public housing. You have to ask: was the shutdown a deliberate attempt to destroy HUD rental housing? Another ‘shutdown showdown’ is looming again in September over Trump’s Wall.” Collins noted that the 16% cut proposed this year is consistent with the Heritage Foundation’s draconian plan to terminate HUD rental housing over 10 years, embraced by Trump’s Chief of Staff and former Budget Director Mick Mulvaney.

The stop-gap agreement with congressional leaders will last three weeks, until Feb. 15, and would allow talks to continue over border security and a wall on the southern border. The agreement includes no new money for the wall, and is a massive concession on Trump's behalf after refusing a similar funding package a month ago.

With the temporary re-opening of HUD and other agencies, an immediate catastrophe was averted as airports began to close across the country. Congress has now authorized about two more months of funding for HUD, USDA and other critical agencies.

However, we are by no means out of the woods regarding the crisis for HUD tenants and owners! HUD will again run out of funds on February 15, unless Congress votes the funds for the remainder of FY 2019.  The uncertainty and chaos that have resulted may result in owners walking away from HUD contracts, and/or turning down Voucher tenants.
NAHT IS MAKING AN IMPACT!   In the past two weeks, NAHT tenants have been featured in an AP wire service story, the BBC, NBC and VICE News, the Huffington Post, and local news stories in Beloit, WI; Spokane, WA;  several articles in Arkansas; and a national radio station in NYC.
Most significantly, the Housing Justice League in Atlanta, NAHT”s Georgia affiliate, emailed 100,000 supporters who shut down the switchboard in Sen. Isakson (R-GA), a factor in Isakson breaking ranks and voting for the Democratic bill to reopen the government last Thursday.
NAHT”s UT affiliate, Crossroads Urban Center, likewise met with Sen. Romney’s office (R-UT); Romney joined Isakson as one of six Republicans to break ranks with Trump and McConnell.  This break in Republican intransigence was what pushed Trump to reverse course last Friday.  NAHT’s mobilization played a small but significant role in this victory!
Check out the NAHT baord press release here
Check out NAHT's government shutdown resource page for more news stories
For information on tenants' rights in Project Based Section 8, Section 8 Vouchers, and Public Housing buildings from the National Housing Law Project  click here for a 1-page flyer; a 14 page background memo; or a 4 page "highlights" memo addressing
Posted by Carey Cabrera January 10, 2019 1:21 PM
Share
1 Reaction 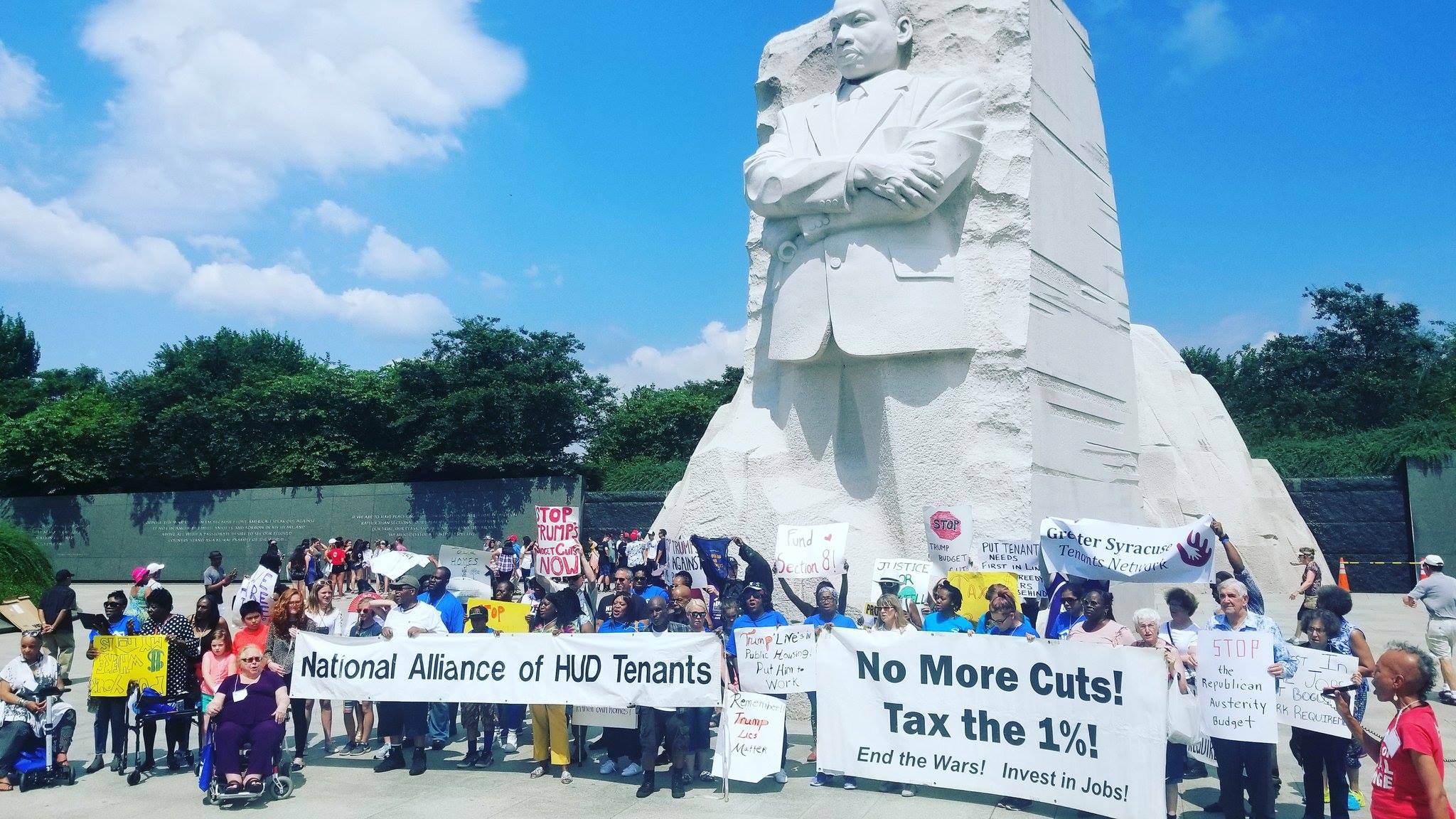 The Trump shutdown of HUD and other federal agencies has already dragged on for 19 days, the longest in US history, with no end in sight!   HUD tenants are already feeling the sting.

On Monday, January 7, HUD announced that no funds are available to renew 1,150 Section 8 contracts that expired in December 2018 and January 2019, or another 550 contracts that expire in February 2019 or beyond.  An estimated 100,000 low income households--elderly, people with disabilities and families with children-- already face repair and service cutbacks, and could face rent increases and displacement, if HUD funds are not restored soon.

Worse, another 21,150 Section 8 contracts housing 1.1 million low income renters have been funded only through February.  There is no evidence that HUD has funds for these properties if the shutdown continues into March, according to the Center for Budget and Policy Priorities.

In addition, HUD does not have funds to continue subsidies after February for 2.2 million more Section 8 Voucher recipients, administered by local housing authorities.  For all Section 8 tenants, owners could attempt to terminate the leases low income tenants unable to pay rents three or four times what they pay today, to cover operating costs if HUD subsidies are terminated.

Trump has threatened to make the shutdown last for “months or years” if he doesn’t get his Wall.  If the shutdown lasts past February, a total of 3.4 million Section 8 tenants could lose their homes.

On January 2, the newly elected House voted to approve a HUD Appropriations bill, previously passed by the Republican Senate, to fully fund Section 8.   But Republican Leader McConnell refuses to bring this or any other funding bill to the Senate Floor, unless Trump will sign it, and Trump has vowed to reject any bill until Congress provides $5.6 billion for the Wall.  Democrats demand that Congress reopen closed agencies first, and debate “border security” and the Wall separately.

For a good explanation of how Section 8 contracts work and the threats to HUD tenants, see the NBC articles below and this blog post from the Center for Budget and Policy Priorities.

Also see NAHT's resource page for articles about the impact of the shutdown on current low-income tenants.

What Tenants Can Do To Save Our Homes

Message:   “I’m a <senior, disabled, family> Section 8 tenant at <your development>.  Without Section 8, my rent could triple or quadruple overnight and I would lose my home.  I’m one of 3.4 million Section 8 tenants who could lose our homes if the shutdown lasts through February.  My home should not be held hostage to Trump’s Wall!”

For Democrats:   Thank them for their support to pass the HUD budget NOW.

For Republican Senators:  Demand that they tell Majority Leader McConnell to bring the HUD funding bill to the Senate Floor and pass it NOW!

For Republican Representatives (House):   Demand they vote to support the HUD funding bill and override Trump’s veto.  A vote against the HUD bill is a vote to throw people out of their homes.

DISLCALIMER: VISTA Volunteers are not permitted to lobby for or against legislation.