We mourn the horrific loss of life that occurred this past week in Philadelphia and New York City during two of the deadliest apartment fires in recent history.

On January 5th in the Fairmount section of Philadelphia, a 3-story row house owned and managed by the Philadelphia Housing Authority caught fire, tragically killing 12 of the building’s 26 residents. Among those killed were 4 adults 8 children. While investigators are looking into the cause of the fire, severe overcrowding and inadequate fire safety measures contributed to its lethality. One of the two units in the building housed 14 residents and none of the building’s six smoke detectors were functional at the time of the fire, according to firefighters.

Later that week, on January 9th, a fire broke out in Twin Parks Northwest, a 19 story 120-unit federally subsidized apartment building in the Bronx. According to investigations, a malfunctioning space heater was the cause of the fire. While flames did not extend past the apartment of origin and  the immediate hallway, smoke spread throughout the building, killing at least 17 residents and leaving 15 in critical condition. New York City fire code requires all apartment doors to be self-closing, in order to prevent the spread of smoke in the event of a fire. Although full investigations are still underway, Fire Commissioner Daniel Nigro stated that the door of the apartment where the fire began did not close on its own, indicating that a maintenance issue likely increased the number of fatalities.

These tragedies point to a larger failure in the nation’s housing system. In the world’s wealthiest country, poor and working-class communities continue to suffer from decades of disinvestment in government owned and subsidized housing, which forces families to accept overcrowded, poorly maintained and dangerous living conditions in order to keep a roof over their heads. We at NAHT will remember the lives lost this past week as we work to make safe and habitable housing a reality for all HUD tenants.

In 2018, WinnCompanies, a for-profit affordable housing property management company overseeing $14 billion worth of properties across the country, was Boston’s largest landlord and one of the City’s most frequent evictors. Today, thanks specifically to the work of retired Boston legal aid attorney Jay Rose and more generally to the entire anti-eviction movement, WinnCompanies has adopted a ground-breaking eviction prevention program centered on early intervention and housing stabilization, with the intention of cutting eviction rates by 50% over the next 5 years.

A recent Shelterforce article outlines the basic tenets of the WinnCompanies’ Housing Stability Program. Often times, a property management company first engages with tenants who are behind on rent when they send a Notice to Quit, which details the amount of rent owed and the date at which that amount must be paid in full to avoid being served a court summons. In contrast, the WinnCompanies’ Housing Stability Program implements a series of preventative measures to stop tenants from reaching the point at which they receive a Notice to Quit or a court summons in the first place.

These preventative measures involve proactively informing tenants of the WinnCompanies’ Housing Stability Program and tenant support options when they first move in and each time they renew their lease, connecting tenants who have unpaid rent with a Housing Stability Coordinator to support them in recertifying and applying for emergency rental assistance as soon as they begin to fall behind, and removing threatening or punitive bureaucratic language from rent collection letters. Importantly, if a tenant experiences a loss of income, the Housing Stability Program enables a property manager to apply on behalf of the tenant to recertify the amount of subsidy benefits they receive retroactively, to the date the income is lost, rather than to the date the loss is first reported. If WinnCompanies does serve a tenant a court summons, the Housing Stability Program instructs employees to set the court date as far out as possible, giving tenants the maximum 30 days to negotiate a manageable payment plan.

City supervisors in San Francisco are currently debating a first-of-its-kind proposal for legislation that would grant new organizing rights to all private housing tenants, protecting them in forming tenant associations and requiring landlords to meet with tenant associations “in good faith” to discuss tenant concerns. In a city famous for sky-high rents and rapid gentrification, the mere introduction of such a proposal, authored by city supervisor Aaron Peskin, represents a huge victory and an opportunity for tenants nationwide.

Moreover, the proposal in San Francisco is modeled after Right to Organize regulations that NAHT fought to win for tenants in federally assisted housing nearly two decades ago. NAHT Executive Director Michael Kane, quoted in a recent San Francisco Public Press article, describes how such regulations increase tenant power and promote tenant organizing in federally subsidized buildings: “I heard stories of people getting harassed, and they would take the regulations to the property manager, who would back off.”

Stay tuned for more news on this exciting development in San Francisco! 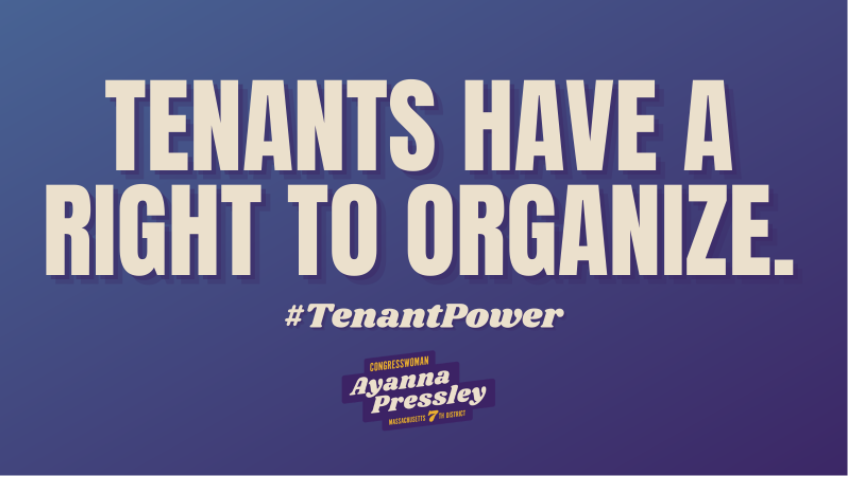 Across the country, some tenants have been forced to live in substandard conditions, lacking sufficient hot water, reliable heat, or a roofthat keeps out rain and snow. Tenants of color, in particular, are disproportionately impacted by health-related hazards in these homes such as mold, allergens, lead, and poor air quality.

More specifically, it would:

Individuals and organizations should contact their member of Congress and ask them to cosponsor HR4237. You can use this letter as a template to email/call your legislator-- just copy and paste it into an email, then personalize it.

If you/your organization are in NY, CA, MA, GA, IL, FL, TX, or OH, you are in states with PRIORITY COSPONSORS-- use this chart to get their contact information; it is critical that you contact them!

To cosponsor this legislation, Representatives should fill out this form and/or please reach out to Jen Curt ([email protected]) with questions.

Thank You For Your Support!

More to be announced in the coming days!