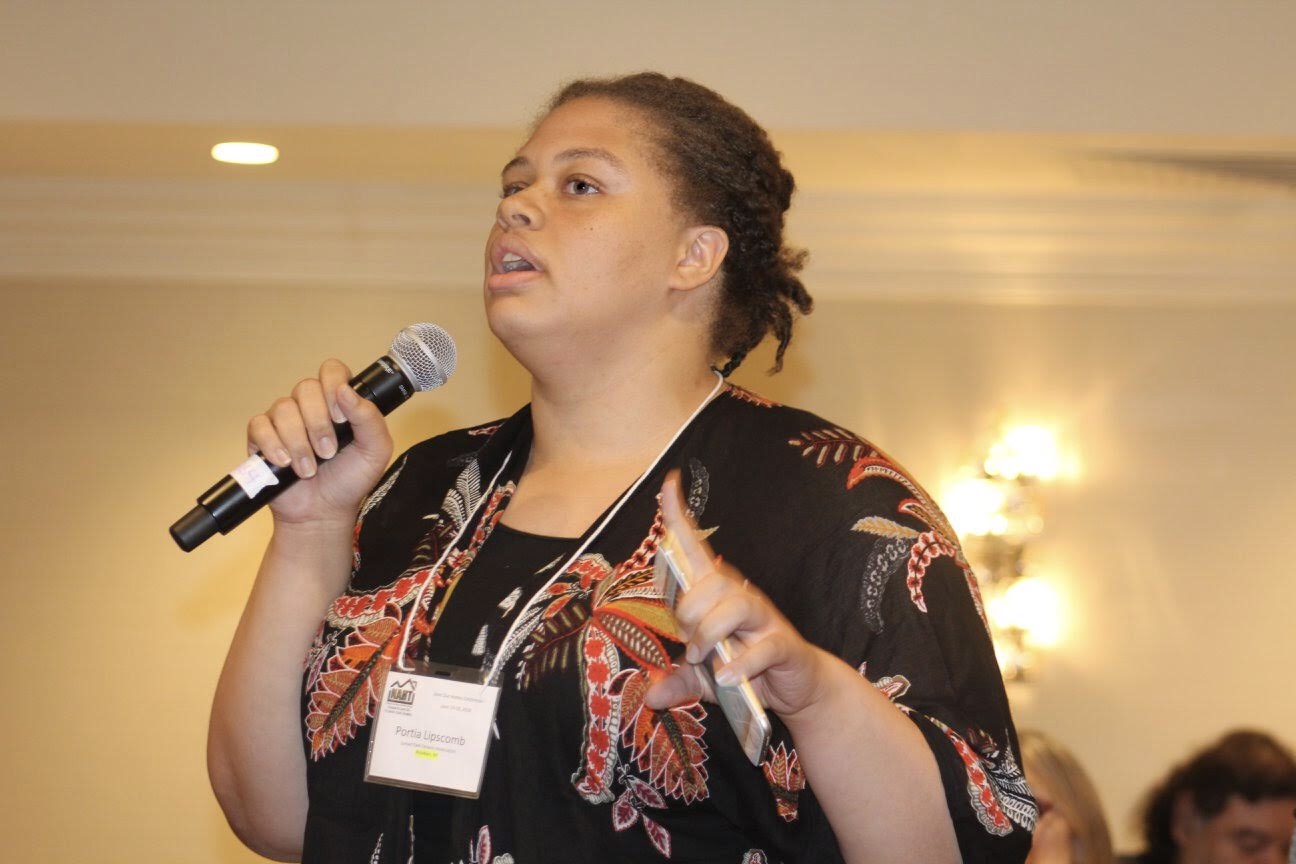 At every NAHT Conference, tenant leaders ask HUD officials how their buildings can score passing REAC inspection scores when they know their buildings are in complete disrepair. In fact, there are multiple reports of buildings passing with flying colors, with scores as high as in the 90s, when they should score a failing grade, below 60. What’s more, tenants know that landlords will do the bare minimum of repairs in order to get a barely passing score and escape follow-up and enforcement from HUD. This is a product the federal government’s systematic defunding of HUD, leading the agency to contract inspections out to private companies.

NAHT updated its recommendations for REAC reform in 2015.   Several VISTAs, led by Nehemiah Bey, Devondrick Jeffers and others, were encountering substandard properties with high REAC scores.  NAHT formed a Special REAC Task Force which recommended changes in REAC’s scoring system to better respond to mold, bedbugs and other common problems ignored in REAC’s current system.   NAHT has advocated for these changes at every NAHT conference and Board meeting with HUD officials since that time, led by Board leaders Geraldine Collins, Demetrius Bonner, Rachel Williams, Charlotte Delgado, Charlotte Rodgers and others.

Recently, HUD published a new notice, Notice 2018-8, regarding HUD enforcement actions for substandard properties.  The new Notice implements Congressional amendments to the enforcement process in FY 2017, and replaces Notice 2015-2. The notice implements several recommendations made by NAHT tenant leaders, but also takes a few steps backwards in regards to tenant involvement when a building scores between 30 and 60.

On the plus side, the new Notice, for the first time, allows HUD to issue a Demand for Corrective Action for properties with REAC scores above 60, if there are:

This opens up an important avenue for tenant organizing and advocacy.   “Multiple tenant complaints” and “significant code violations” give us an avenue to invite HUD enforcement actions.   Also, if REAC scores are high but there are “systemic deficiencies” (such as mold) “within units”, HUD can issue a Demand for Corrective Action.

On the down side, HUD enforcement is now discretionary for properties with REAC scores above 30 but below 60.  The previous requirement for a Compliance, Disposition and Enforcement (CDE) Plan has been dropped.  Where properties score below 60, HUD can require a 100% unit survey and corrective action plan, but this is no longer required to be shared with tenants.   The only Notice requirement is to share Notices of Default/Violation with tenants, but not the Survey or corrective plans.  Following the FY 2017 Congressional amendment, tenant notice and participation has been downgraded.  NAHT leaders will continue to fight for tenants to be included in the repairs and renovations process when their homes receive scores less than 60 but more than 30.

NAHT has long advocated for these positive changes in REAC, most recently in the NAHT Board’s October meeting with Brian Montgomery, HUD’s newly confirmed Assistant Secretary for Housing.  Montgomery opened the meeting by recalling his discussions with NAHT on REAC reform in 2007, when he was previously at HUD, and that reforming REAC was one of his top priorities.

Our persistence is  getting results!   We will keep the heat on until REAC’s scores are brought up to date, and continue advocating for NAHT’s recommendations to involve tenants in REAC inspections.

"In St. Louis Park and St. Paul, Minnesota, tenants from Lou Park and Mears Park Place Apartments are facing the non-renewal of their Project-Based Section 8 contracts with Bigos Management, which would equate to a loss of 82 long-term deeply affordable units. These residents primarily represent folks from immigrant, elderly, disabled, and low-income and single-parent family backgrounds. At Lou Park, half of the tenants are Russian Jewish immigrants.
VISTAs Ivory Taylor and Asha Ahmad from HOME Line worked with the tenants to establish tenant associations; the tenants then reached out to Bigos Management to request a meeting to talk about the non-renewal and the effects it would have on the residents. After receiving a letter back from Bigos Management's attorneys which reiterated their decision to end the contract, but did not respond to the request for a meeting, residents decided to organize an action around the Jewish holiday of Sukkot.
Sukkot is observed by building a temporary shelter in your backyard to invite friends and neighbors to join together and celebrate the end ofsummer. Many neighbors at Lou Park find meaning in the symbol of a temporary shelter this year due to the uncertainty surrounding the future of their housing.
Jewish Community Action, HOME Line, and the St. Louis Park Housing Team helped the tenants organize the event and spread the word for turnout. Numerous state and local elected officials attended, included current House Representative and candidate for Lieutenant Governor of Minnesota, Peggy Flanagan, who spoke about growing up in Section 8 housing in a building across the street. Rabbi Michael Latz performed a blessing of the Sukkot and tenants from both Lou Park and Mears Park Apartments raised their voices about the need to preserve their homes as Project-Based Section 8. The program was followed by a community potluck where people shared fellowship and tenants continued to press community members and elected officials for support in reaching and negotiating with Bigos Management.
Tenants were very excited about the turnout and said the event made them feel hopeful. They were thrilled to see the support they received from their community. The event has prompted several elected officials to take further action, based on tenants demands. The residents continue to push forward with the support of their community in the fight to save their homes." 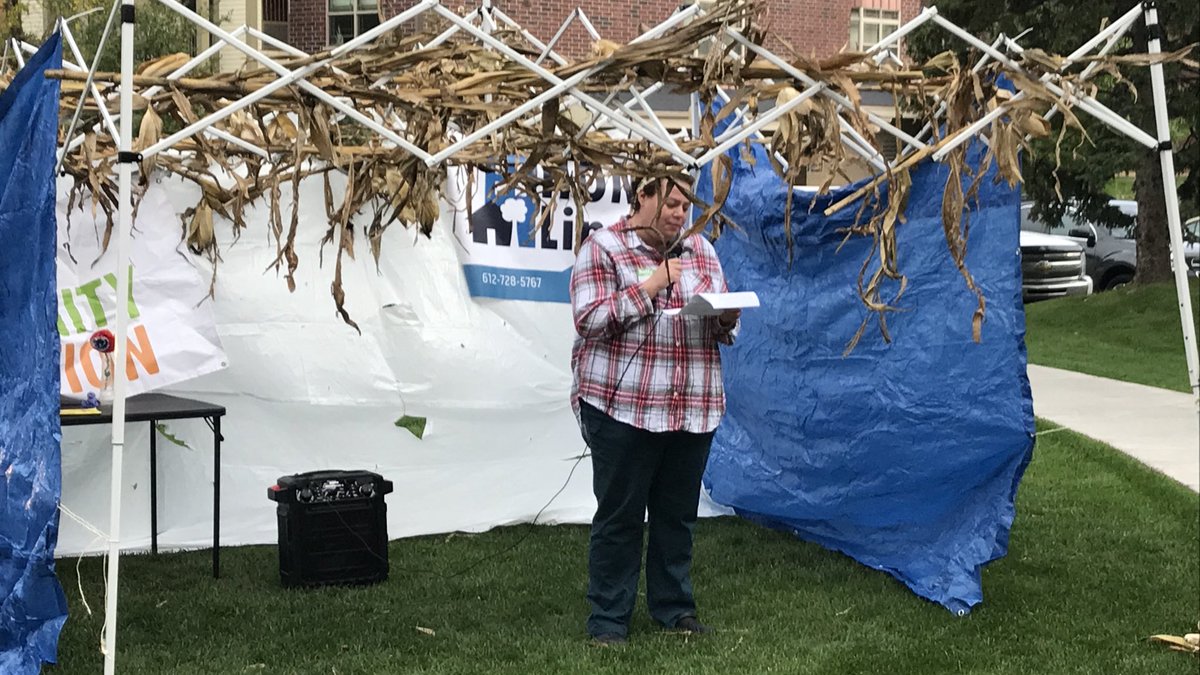 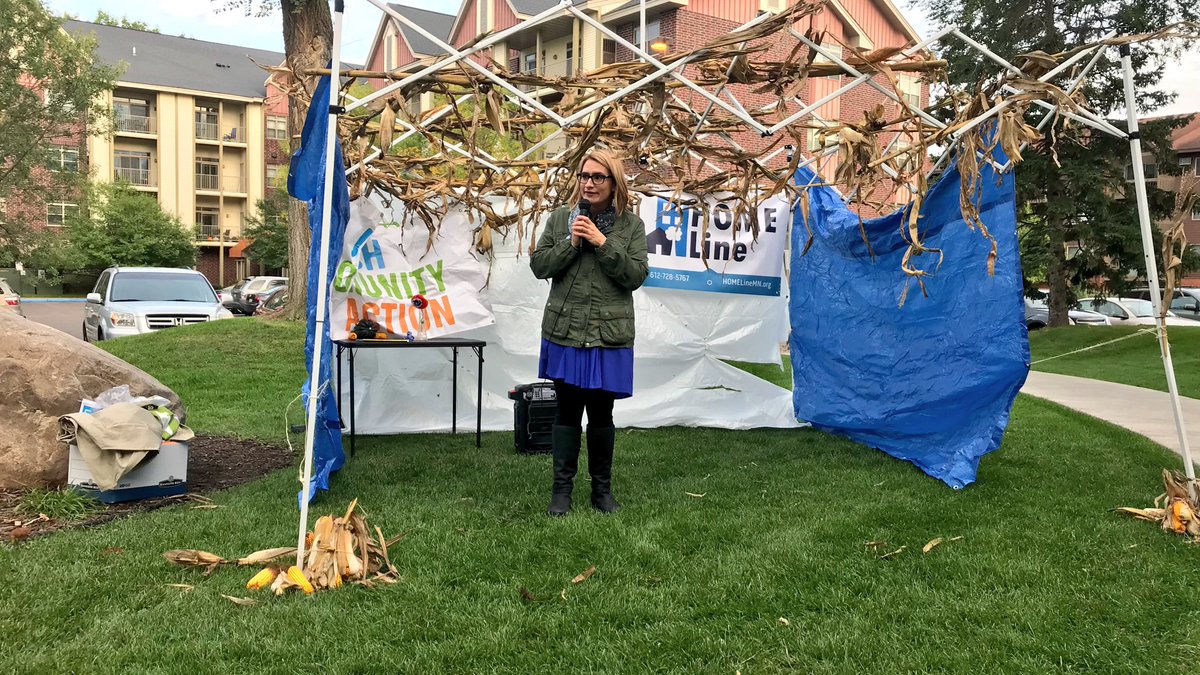 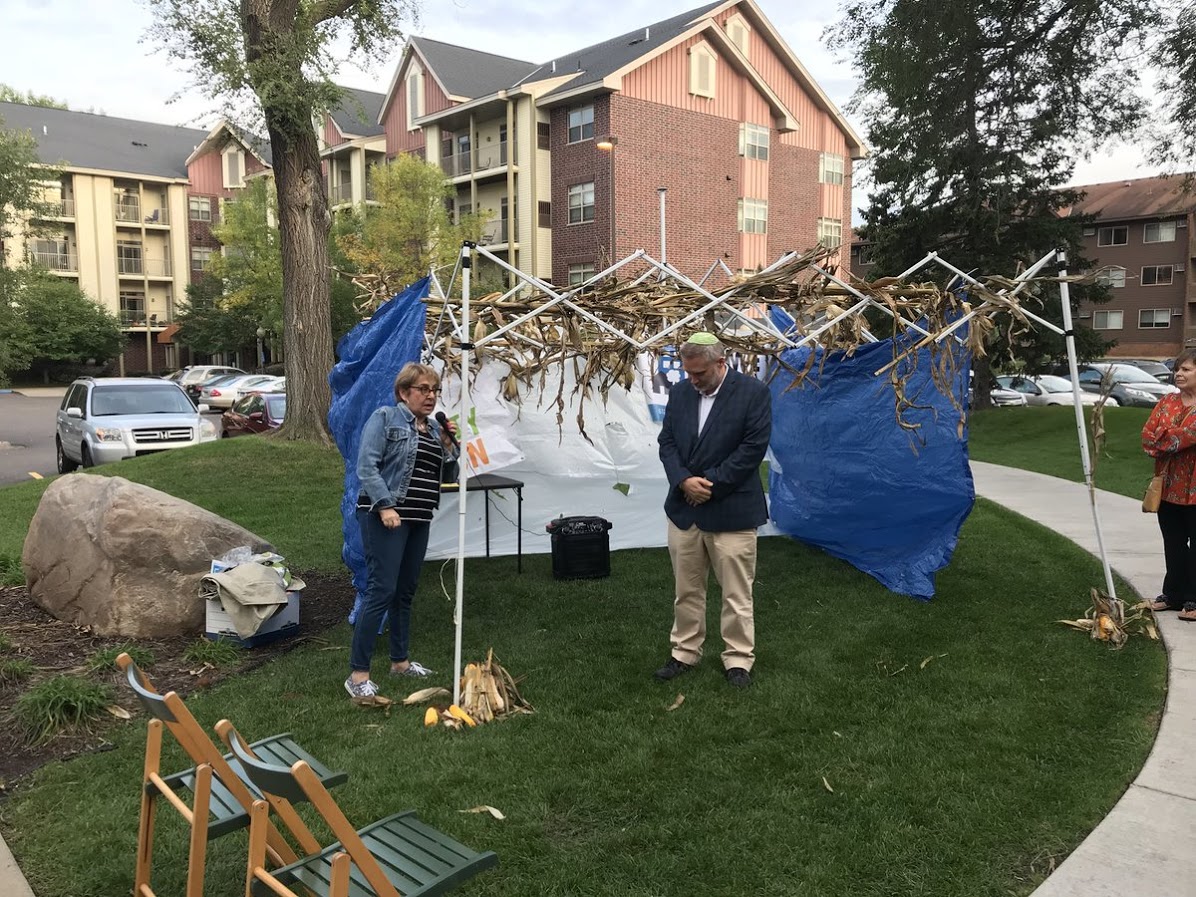 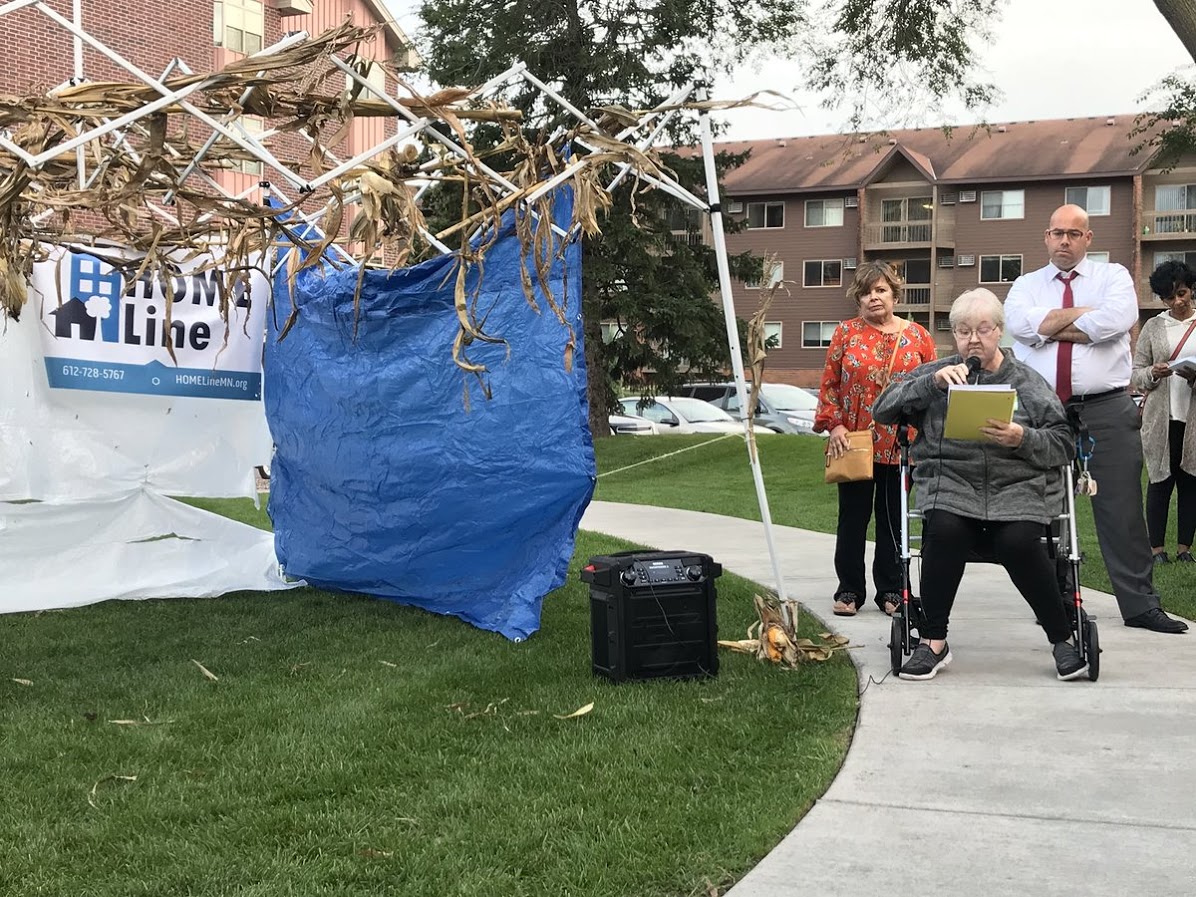 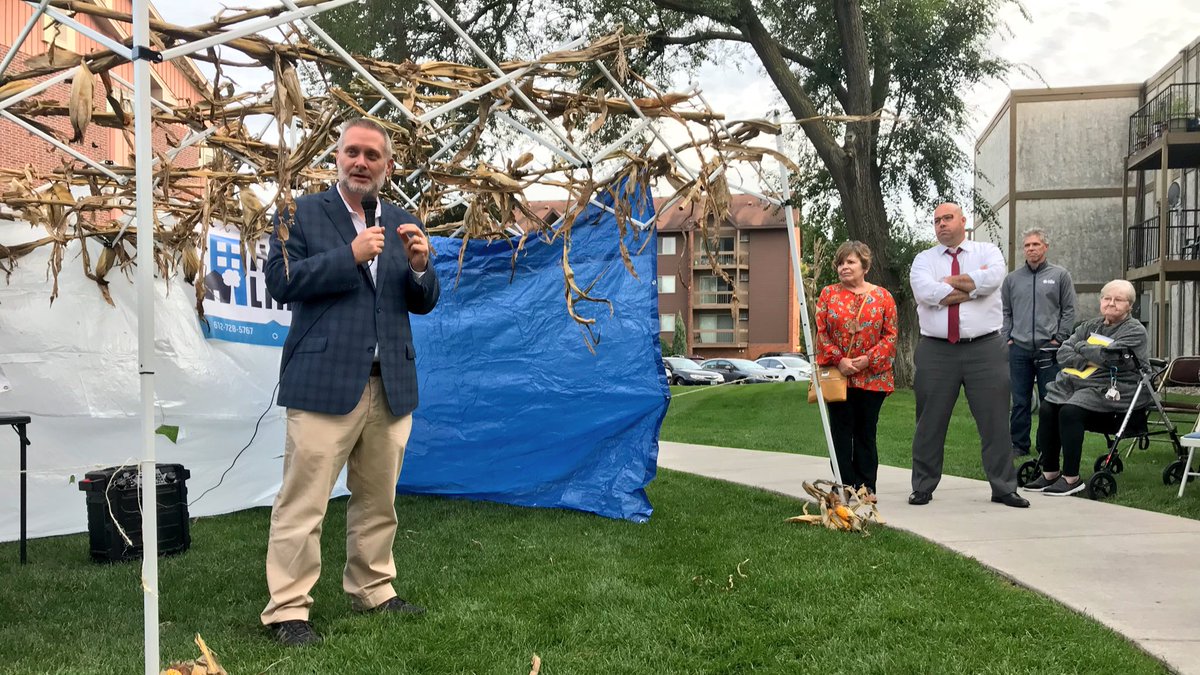 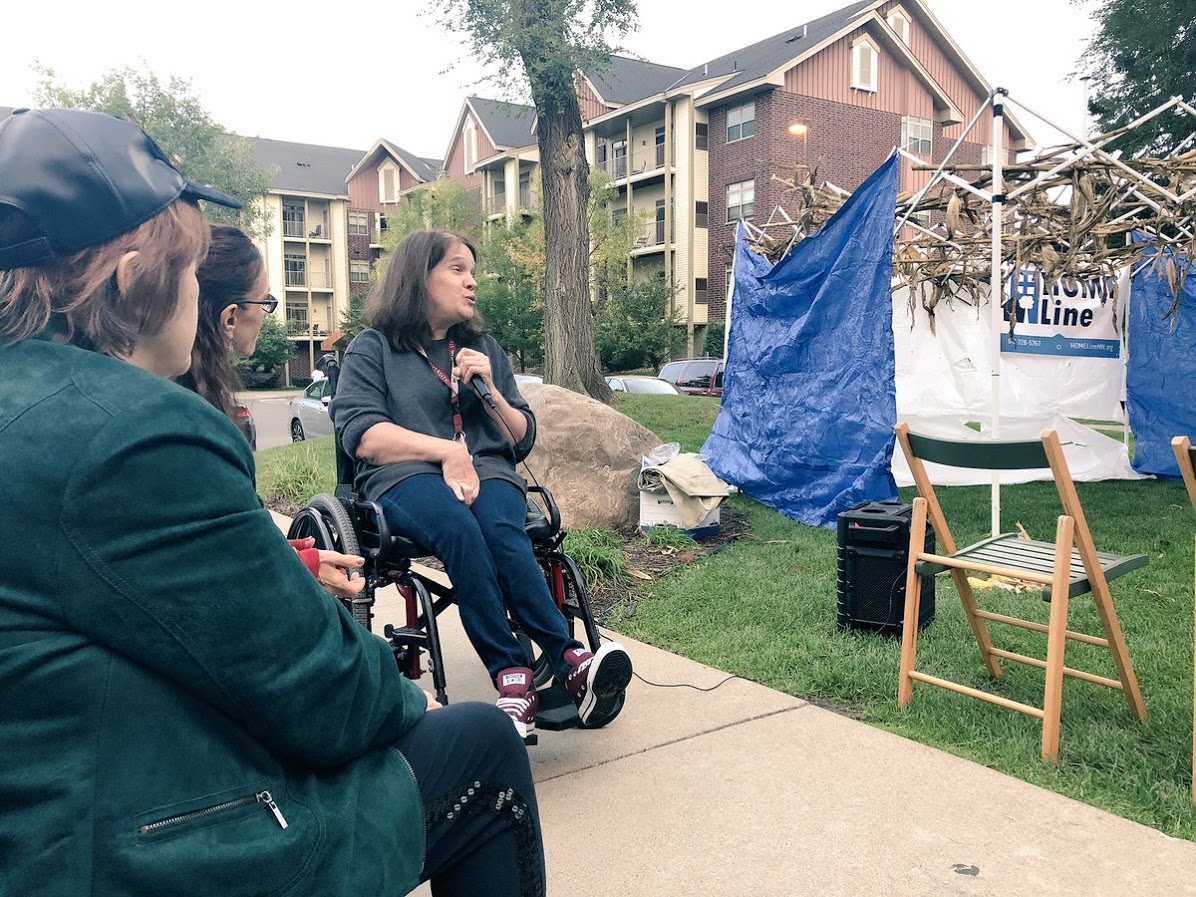 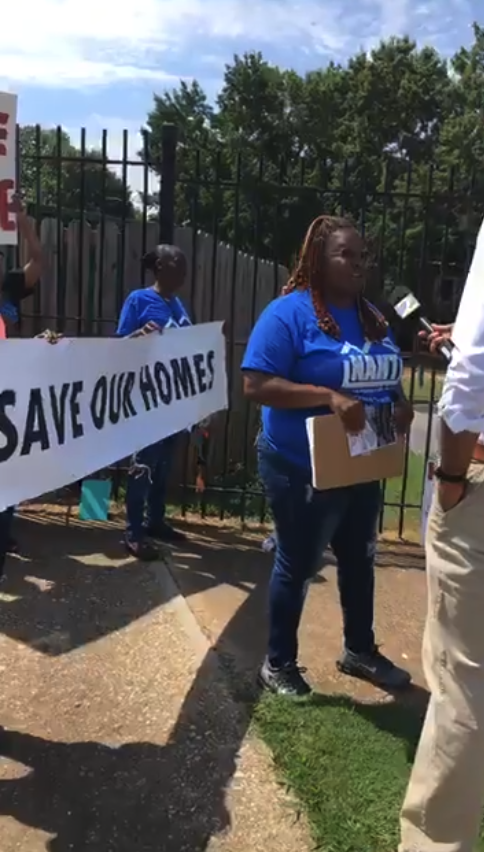 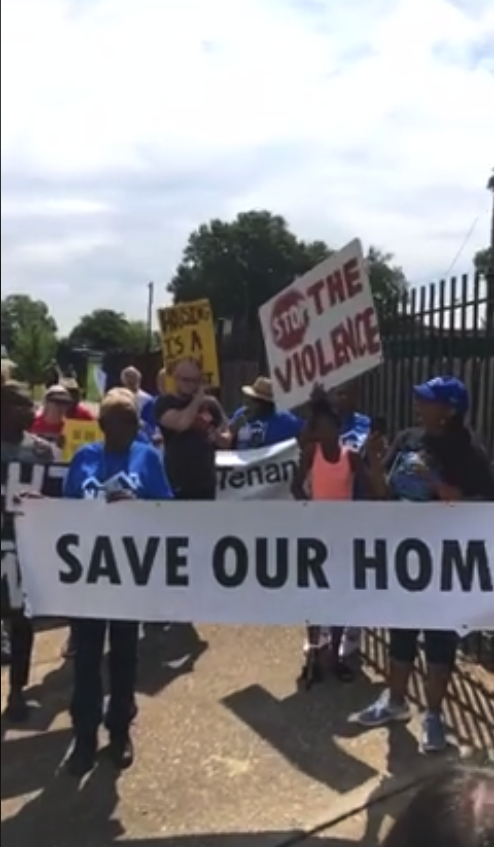 NAHT member group Forest Cove Apartments and NAHT affiliate Housing Justice League in Atlanta, held a rally at the Forest Cove complex on Wednesday, July 18th. Tenants delivered a list of demands to the management office, which included repairs and for the tenants association to be included in the repair planning. Three NAHT board members joined in support and spoke at the march. Forest Cove Apartments is owned by Global Ministries, a notorious slumlord being forced by HUD to sell it's entire portfolio to another company. NAHT is beginning a national campaign to organize tenants in Global Ministries properties to make sure tenants voices are heard throughout this process!

The National Alliance of HUD Tenants meet to better understand the problems tenants are facing in their homes meaning apartment buildings, and having workshops to address how tenants can tackle these problems to solve them for the greater good of the tenants in these buildings. Representatives from HUD were present to help and learn about these issues.

NAHT also traveled to Capital Hill in Washington DC and confronted legislative Aides on issues plaguing NAHT like promises made by HUD that are being recanted.

We marched around the Martin Luther King Jr memorial and made protest on issues facing the poor people’s march and took many photos of NAHT’s plights with speeches, and banners . 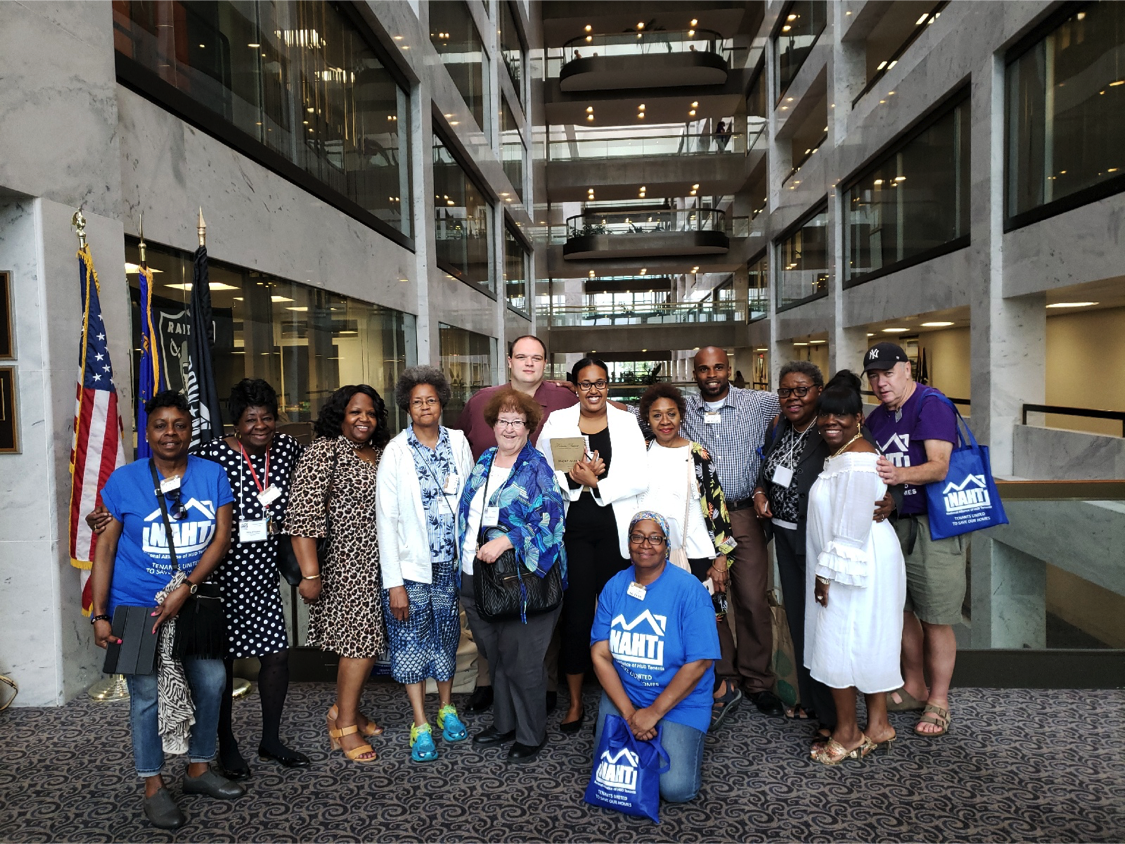 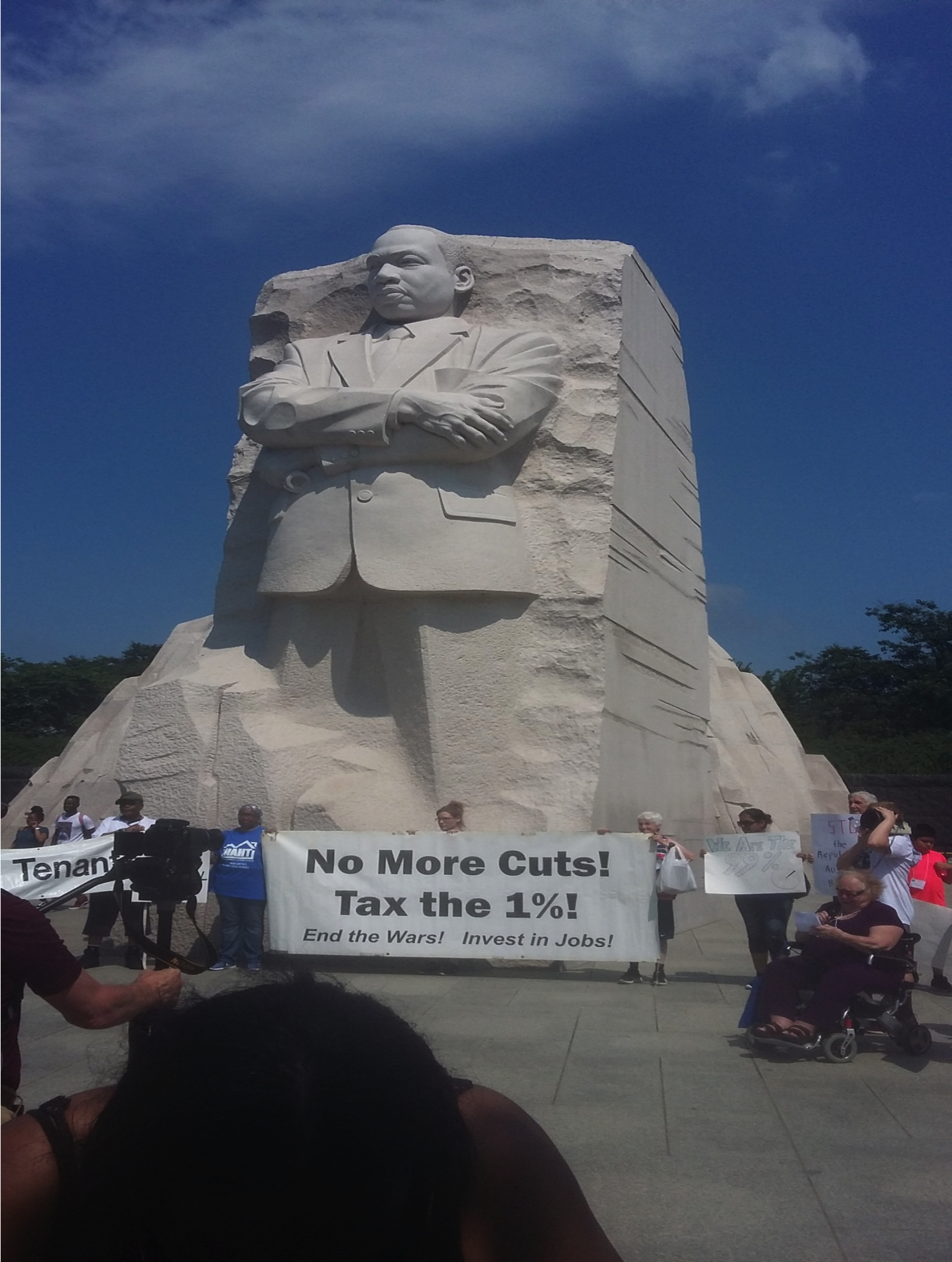 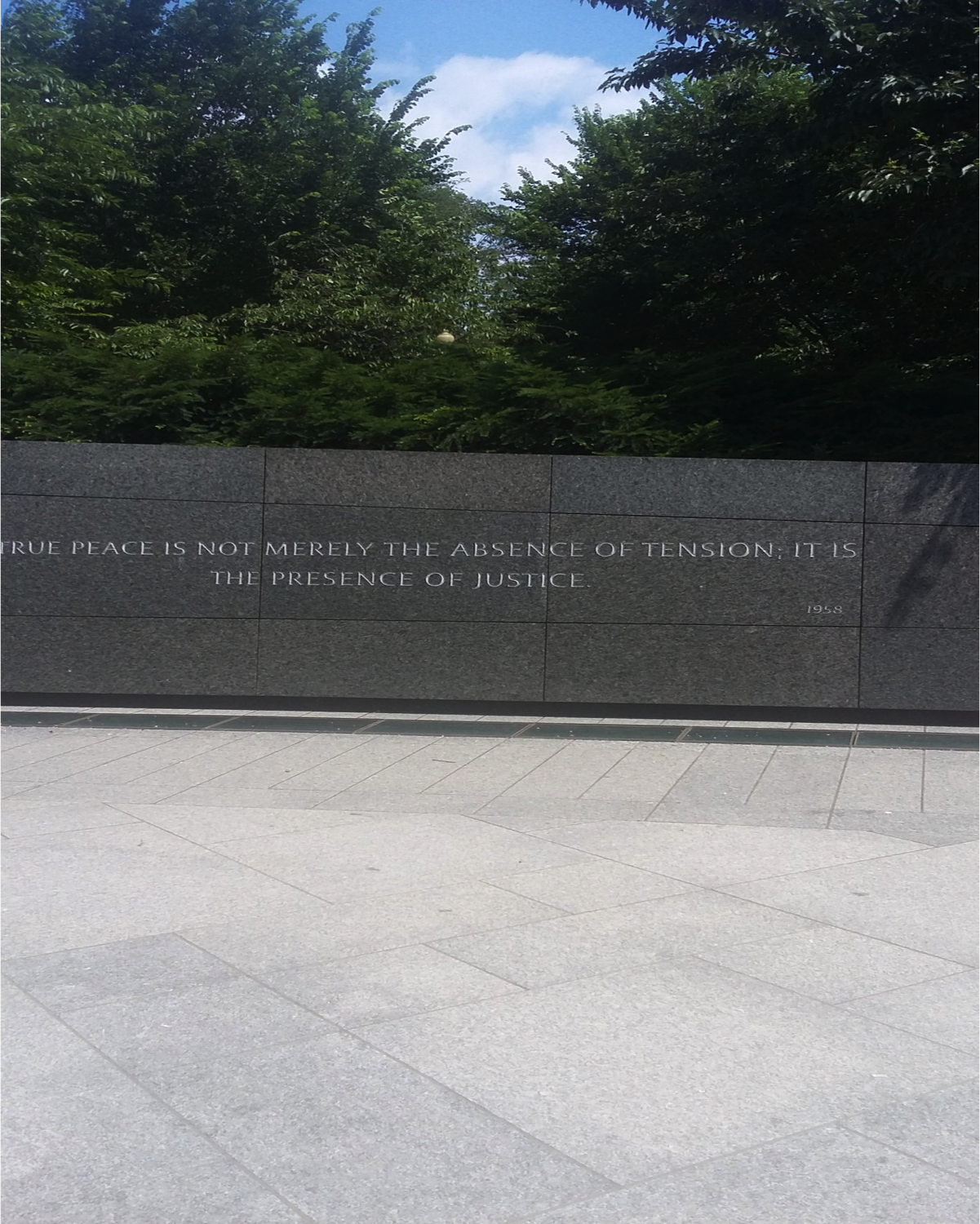 "True peace is not merely the absence of tension; it is the presence of justice" 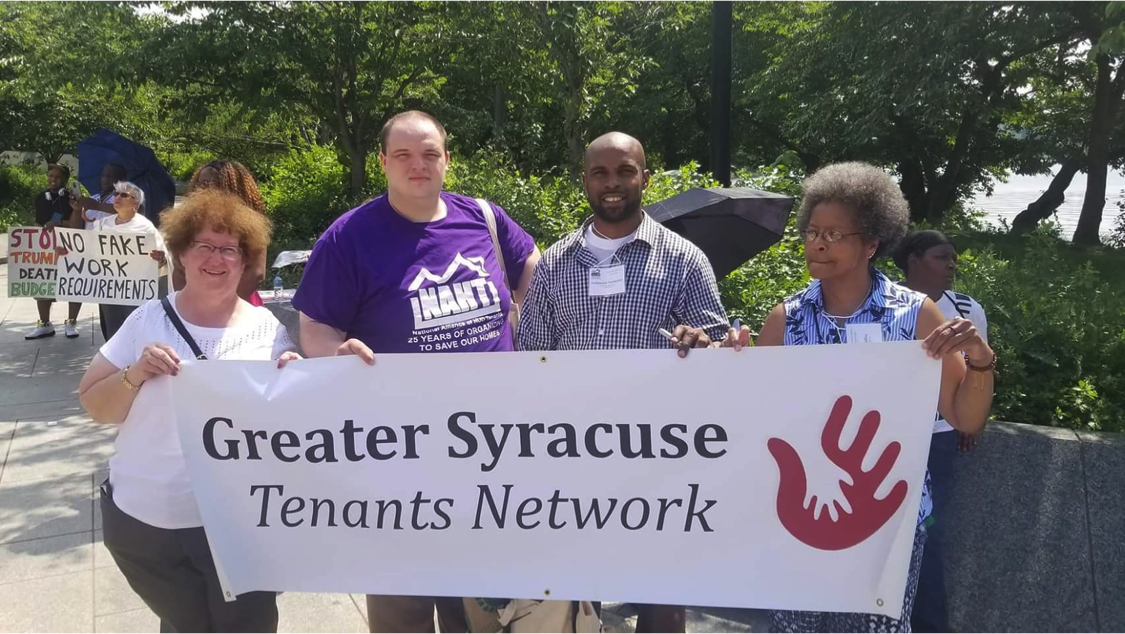 It was a wonderful trip to Washington DC, and to see all those people so eager to fight for the poor, disabled and senior citizens living in horrendous conditions that makes bullying ,harassment, and unsafe living a burden that no one should have to suffer. I personally applaud the NATIONAL ALLIANCE of HUD TENANTS . 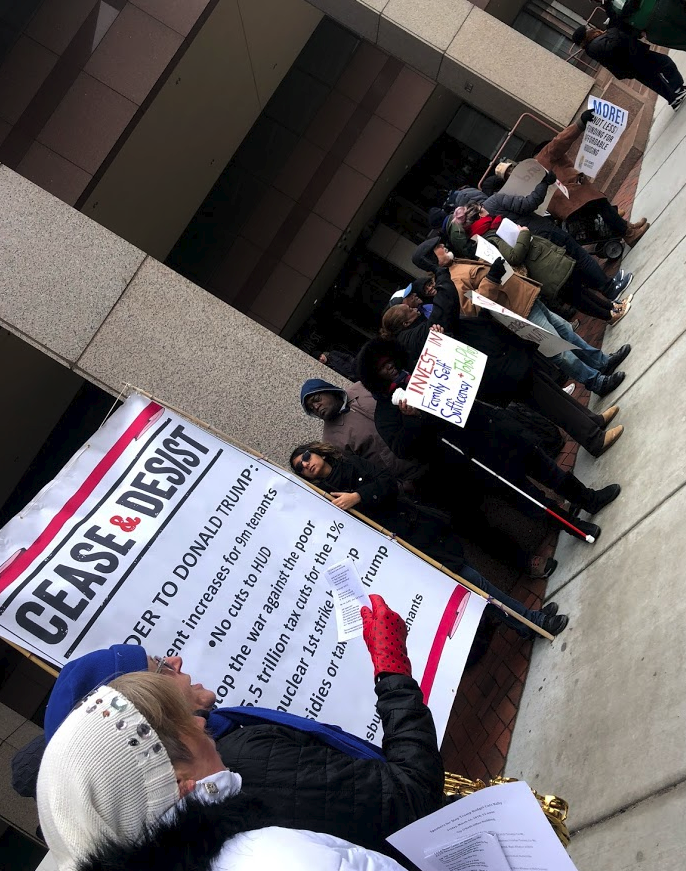 Elected leaders of the national US tenants union today denounced the housing bill proposed April 25 by HUD Secretary Ben Carson as a “vicious and cruel” assault on the poorest of the poor.

“Carson’s proposals will push millions of people from their homes.  Carson’s plan is not about moving people to work--its about needlessly cutting people from programs that enable them to find work,” says Ed Lucas, 59, President of the National Alliance of HUD Tenants (NAHT), Marine Corp vet and director of a neighborhood jobs center, who lives in a resident-owned, HUD-assisted building in Chicago.   “Millions will be displaced if these deeply cruel proposals see the light of day.  Congress should reject them out of hand.”

NAHT affiliates in Boston, Atlanta, Spokane and other cities have held or are planning local actions to protest the Carson-Trump rent increase and bogus “work” requirements.   Tenants, joined by the HUD employees union, delivered a giant “Cease and Desist” order to the Boston HUD office in March.   A similar action is planned in Atlanta on May 1.

In line with Trump’s 2019 budget proposals, Carson’s bill proposes draconian rent increases for the 4.6 million American households who receive HUD rental assistance.  The bill would raise rents for tenants below the age of 65 from 30 to 35% percent of gross income; at least triple “minimum rents” paid by the most destitute; and eliminate deductions that keep rents affordable for seniors and disabled people. Overall, rents would jump overnight an average of 32% for 4.6 million households--and an incredible 111% for HUD tenants in Puerto Rico!   Close to a million low income children of the most destitute households would face homelessness, according to the Center on Budget and Policy Priorities.

“Trump wants to raise rents on the poorest of the poor, in order to cut taxes for the richest of the rich,” comments Deborah Arnold, 54, a minister and community activist and NAHT Vice President from Atlanta, Georgia.  “80% of HUD tenant households are led by women.  We, too, demand that Congress reject Trump’s vicious assault on the women, children, elderly and disabled people who live in HUD housing.”

Carson’s bill also proposes “work requirements” for HUD rental assistance, in line with Trump’s recent Executive Order that would require people to have a job or enroll in dubious “work programs” in order to receive Medicaid, Housing Assistance and Food Stamps.  NAHT leaders denounced these proposals as administratively wasteful, ineffective and punitive, especially in the absence of jobs, training and resources to make them work.  Trump’s 2019 budget actually proposes to cut job training and child care programs that enable HUD tenants to keep and find work, including successful programs such as Family Self Sufficiency and Jobs Plus in Public Housing.

“Trump lives in Public Housing--the White House. Will a work requirement be imposed on him?,” asked Geraldine Collins, 63, a disabled, retired medical administrator and NAHT VP/East who lives in senior housing on Manhattan’s Upper West Side. “Congress should make Trump do something useful, rather than tweeting, playing golf, watching cable TV, and destroying the nation’s social safety net.”

Comments Rachel Williams, 62, an Army widow, minister and long time community activist in Beaumont, Texas and NAHT Board VP/South:   “Adding millions to the ranks of destitute and homeless people is deeply cruel and un-American.  Homeland security begins with a home!”

Founded in 1991, NAHT is the national tenants union representing 2.1 million families in privately-owned, HUD assisted multifamily housing.   NAHT’s mission is to empower residents to save and improve their homes as affordable housing.   Contact NAHT to locate tenant spokespeople in your city. 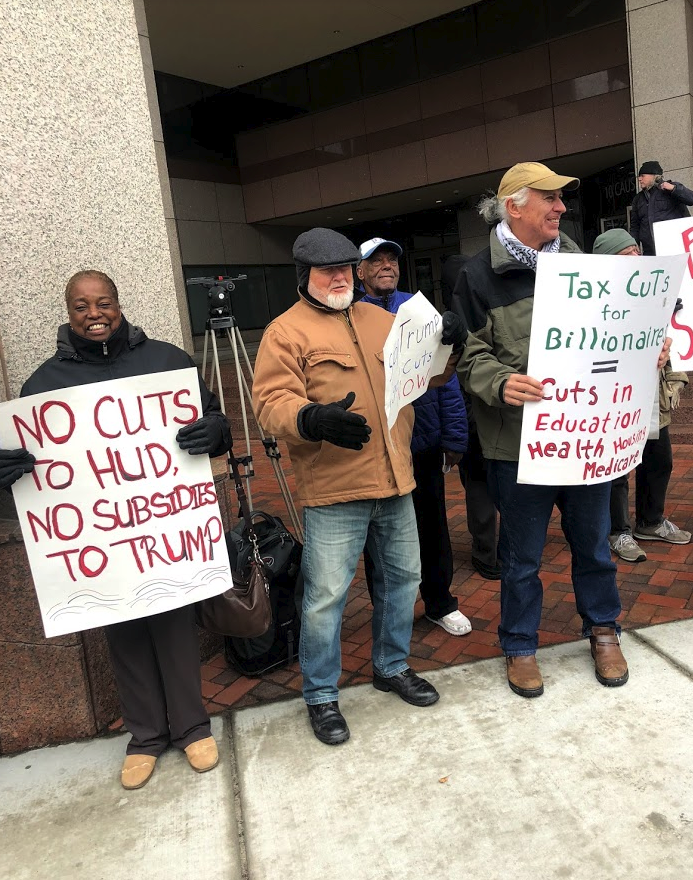